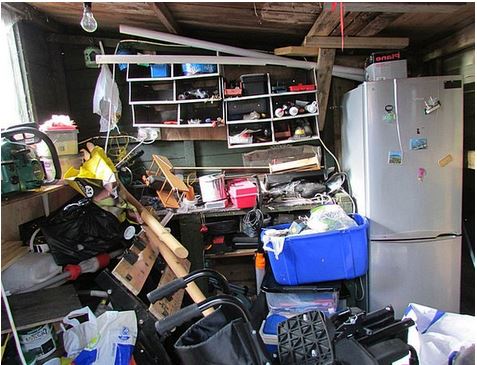 Being imprisoned for any length of time does strange things to the mind. One starts to look for things to occupy the time to keep the old grey matter active and the body moving.

This shutdown must be the biggest imposed restriction on mankind in, well anyone’s lifetime, probably any lifetime other than being incarcerated in Château d’If. Being let out to go to the supermarket is about all the exercise many are getting, so those of us who have an outside space are turning to outdoor exercises as in projects.

After weeks, and it is weeks now, of finding tasks that have been put on the back burner for years we have slowly worked our way through repainting small rooms to repainting large rooms, clearing rubbish accumulated over time, discovering lost relics of the past in the loft, re-organisation among the Christmas decorations, finding long lost tools down the back of boxes in the garage and starting to repair those items that have been waiting half-dismembered on the workshop bench.

The sight and sound of this industry can be seen as neighbours emerge from hibernation desperate to find something to do. Hands appear above fence level as next door's daughter starts to paint the shed, on the other side a lot of banging as they construct a run for the new puppy, gardens are being spruced up to levels never before reached and a new-found love of growing your own has swept the land.

How long the nation can go on discovering projects long forgotten to keep idle hands busy is anybody’s guess though I am sure many of us are beginning to run low. The wife who has been smiling at all those requested jobs that were never completed but now are, is beginning to falter in finding more of the same; once those flaky windows have been painted that is that for another couple of years and some jobs despite needing doing are now out of bounds as the advancing years make them verboten - the long extending ladder doesn’t see daylight these days.

So what has been my latest project? The shed, long awaiting a clear out and re organisation. I started to attack it a couple of days ago. It is a fairly large shed (12 x 12) and contains much of my garden equipment including the ride on mower, yet somehow it has become the dumping ground in recent times for non related items that could not be found a home elsewhere. So while the sun shone all came out onto the lawn and a good spring clean ensued. Large numbers of spiders were disturbed, their webs pulled down and boxes opened to find nothing but rubbish inside. Why do we keep rubbish? That old adage ‘it might come in useful later’ has been shown over a lifetime to be just, er, rubbish, so the garden fire just got bigger.

Lost tools were found, a rather nice Italian container believed missing in action was found also, along with assorted lengths of different hoses (why?), and - a small delight that I related to JD yesterday - the home of the dormouse was found at the bottom of a large cardboard box: perfectly round and around five inches across, it had been made from small pieces of capillary matting in the same box chewed off in small pieces and assembled into this most cosy of winter abodes, a work of art indeed. No sign of the dormouse though, perhaps he has moved.

The shed with the contents back inside looks twice the size: items can be seen, new hooks added for tools and all that rubbish gone, job satisfaction guaranteed.

But what next? The first project in this confinement period I tackled was a mower brought out to be serviced before the summer season begins. Having completed the service I fired it up, only to see it hiccup and die. Several repetitions had same result. I went through the usual troubleshooting list but still couldn't get it running, so I parked it and ordered the only item I thought would solve the problem: a new carburettor, not kosher of course but a Chinese repro model. Why? The mower is a Honda and anyone who has owned anything Honda knows that spares are expensive, and this mower being 34 years old is not a candidate for expensive overhauls. It has never ever faltered until now and is a good example of why I purchased a lot of Honda equipment in previous years: they don’t go wrong.

The new carb arrived and was fitted but the problem remained: it would run at start up and then die. I parked it and was not prepared to spend any money on something that old, as it is not cost-efficient, but I was loath to dump it as everything else about it was in top condition.

Anyway to cut a long story short I ordered online (as you can’t find anywhere open) some spark plugs for the other mowers and strimmers as I was servicing all, and when they arrived I put a new plug in the old mower, pulled the cord and it started and stayed running; problem solved. The plug in it was the original, it had never looked worn so was never changed but it has now and a new lease of life has been given to a trusted piece of equipment. This early model Honda was, I see, voted best mower ever in an American publication on the subject; I’ll go with that, it is a Honda HR214 before the roto stop became obligatory.

Enough of mowers. The garden itself has had extra treatment: new edges have been cut on the lawns, the final vestiges of autumn leaves have finally been cleared away (a pain job this season as the prevailing strong  winds have meant being the last in line of a series of large plots and gardens I get everyone else's leaves as well as my own), the seeds are all sown in the propagator, the greenhouse has been cleaned earlier with Jeyes fluid, the containers are ready with fresh compost and yes I am running out of things to do, though the exterior windows of the house do in some cases need repainting. After that if lock down continues, apart from the country being broke I will be sitting outside, weather permitting, drinking my way through my cellar. I have already started, all that good stuff that has been purchased and hoarded for later in life has finally reached that later in life stage when you start to broach it. Would that moment have happened without the lock down? Probably not, so at least one good thing has happened.

I see two doors away the daughter there is now painting the front door. It seems a trend here with daughters, and the father is starting to renovate their under cover eating area, something I know he has been promising for at least five years - he really isn’t into doing anything round the house other than talking about it.

Where and when will it all end? Dogs have never had so much walking imposed on them, the trip to the supermarket has gone from one resembling those pictures of cold war eastern GUM stores with one loaf on the shelf to a form of a retail maze with arrows, taped areas and wardens directing you; the antics of people trying to self distance in a place that cannot ever allow two metres and all times has resulted in people doing some athletic sideways jumping and backtracking resembling line dancing, so worried are people about actually meeting someone inadvertently.

Will we ever get back to normal? Of course. Those who say things will never be the same forget what history has taught us. Certain things will change but most will revert. They had better hurry up with it all for as well as the country bankrupting itself I am rapidly running out of things to occupy myself with.

The garden has never seen such activity at 'The Turrets'!

I've found a whole new area for growing leeks, carrots, springs, beetroot, French beans, courgettes and a hardening-off GH which will be taken down when t'job's done...

I've just run out of compost, and will become more angry at the prices online suppliers are quoting, so will use my own!

We now have about fifty tomato plants, so the whole house will be surrounded...

Michael, I was very fortunate with the compost this year, I wont buy any of the non peat based composts or even the mixes, though they have improved, but I purchased some Levingtons which was a mix by mistake, about ten bags and it was useless for anything but patio use, so went back and found a very good peat based compost by Clover an Irish firm, so I am awash with compost this year which is just as well, as I do use a lot.

I also made the mistake of purchasing Levingtons seed compost, sadly Levingtons is now owned by Miracle Grow as is much else, the original Levingtons composts were of a very high standard now they are rubbish, trading on the good name only.

Sackers, that was wonderful! I wonder if the bloke really did get his leg over, or is that a bit of fantasy...:

Wiggia, I had to ring my local Garden Centre, just to see if I could have a few scrapings from their own dumping ground, and a gorgeous favourite lady rang back to take an order for delivery this week!

While I am still in rapture at talking to such a fabulous woman, I'll also get four bags of John Innes delivered to my gate this week!

Sometimes, life just ticks more boxes than it can handle, and that goes for the ladies at my favourite GC!

(Just as an aside, I used to know a relative of the John Innes family. He's nearly past it now - maybe is, but I learnt that his wife died only recently - she would ride her horse to collect her newspaper on some days. Gorgeous lady, and now sadly missed...)

@Michael: I only say the 1963 version and can't remember legover, besides it was a bit too early in British cinema.

The being stuck at home even got Mr C out into our garden to tidy up areas that had got neglected. Things that he needed to do rather than me.

Prior to the lock down he had agreed that I could get a gardener in to help with those things ;-)

The garden is beginning to look nice again but I need to source just the right kind of additional colour for the garden.