Retail is detail, as the great shop managers say. So is medicine, but I’ll come to that in a moment.

In the latest GE campaign, the Left tried beating the Tories over the head with the NHS, again. That photo of the boy on a hospital floor was a good one, wasn’t it? Accusations of fake news from one side, of trolling on the other. All I’d observe from this report is that the hospital only apologised for having nothing but chairs to sit on rather than a trolley, so why the lad was on the ground is a puzzle. 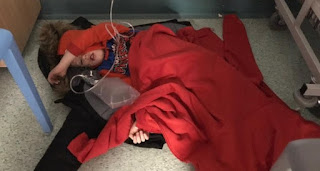 I am also mystified by the empty gravity-feed drip bag lying uselessly across him - and tubes not attached to the nose in the second photo: 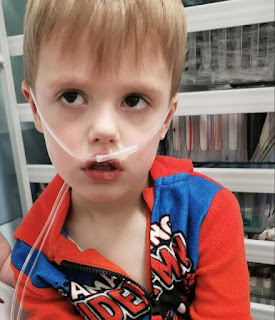 ... especially since he was still waiting to be seen?

Yes, the NHS is under intense pressure. Partly because it can do much more than it used to; partly because demand then rises even faster than supply; partly because of drugs, drunkenness, quarrels ‘getting stabby’, self-harm and all the other symptoms of a country in moral crisis. And I certainly hold no brief for the chirpy Jeremy Hunt or his hapless successor, but the job description of Health Secretary appears to include ‘scapegoat’, as the Bethany case shows.

And yet, however much you spend, you still have to mind the shop. Let me give you an illustrative case history.

My good friend Jim (name changed) was driving a couple of family members somewhere when an idiot in a window-darkened fast car shot out of a side street at him. Having quick reflexes, Jim swerved clear but then hit a series of three unfilled potholes, jarring his spine. Though in his late seventies, Jim was fit and active – a keen archer – and so it was some time before the back pain intensified to the point where he was X-rayed and vertebral displacement discovered.

When you are old, the system writes you off. Jim told me his GP gave him three plan options, all of which amounted to palliative care. He was to slide bedridden down the helter-skelter into the slot, with painkillers to ease the way.

But Jim wasn’t a quitter, and was highly intelligent. He scoured the internet and found a surgeon able to do the operation to fix his back. It succeeded; now for the physio program to get him back on his feet. Jim was moved to another hospital for the recuperation phase.

The first thing was, Hospital Two took his bed – a highly specialised one – and swapped it for another that was shorter, so that his feet were constantly pressing against the end. There was a hoist next to him, to get him to a chair for a couple of hours each day as part of the rehabilitation program. A couple of times, the staff managed to bump his toes painfully in the process; and increasingly it seems, they just didn’t get him out of bed at all.

Jim had suffered from sleep apnoea for many years, and had a CPAP machine to pump air at night. But nurses tidying busily disturbed the mechanism, which then got blocked with its water. So when I first visited him in hospital he hadn’t slept for four nights. The nurses, often clustered around the workstation outside the ward, hadn’t noticed. I got that sorted, and in subsequent visits kept Jim supplied with newspapers and magazines to keep his active brain occupied; and a squeezy ball to exercise his slowly wasting arm muscles.  They were eventually tidied (thrown) away.

Jim didn’t feel safe there, and wanted to go home – and no, he wasn’t demented. So a fresh home care plan was made and he had an adjustable bed delivered, plus a hoist. But soon after that the family were told not to use the hoist, since they weren’t expert and his wife was about his age. Flat in bed he lay, muscles weakening and even a slight angling up becoming more challenging for him.

Then there was the drugs program. The first painkillers tended to have constipation as a side effect, so Jim was also given laxatives to counteract this. But then the pain prescription was changed yet the laxatives continued, causing constant and strength-sapping diarrhoea until the foul-up was realised.

Speaking of pharmaceuticals, there were some he had never had, and should have had. Jim’s X-ray from the year before had also shown a shadow on his liver; but the technician hadn’t noticed. This was the ‘cloud no bigger than a man’s hand’ that was heading his way. I asked Jim what they were giving him to fight the cancer: nothing.

I last saw him in the hospice – he lasted only a few days there. His passing was peaceful. But long premature.

I don’t think money alone would have solved all this. It needed the close attention of a Stuart Rose, or a Philip Green; detail managers. Semi-ignored plans and responsibility sign-offs aren’t enough.

Money, of course; but money employed to best effect.

Very interesting. Patients plus family and friends often seem keen to believe that medical staff are more competent and more interested than they really are. Understandable of course.

For what it's worth, liver cancer is basically incurable.

The details do matter, and mistakes happen. From observation, overwork is more likely than being uncaring.

@P: Liver cancer can be cured if spotted early, which in this case - by chance - could have happened: https://www.nhs.uk/conditions/liver-cancer/treatment/

I certainly don't accuse NHS workers of not caring, but the way their work is organised and assessed may blind them to patient needs.

It's a ghastly story, Sackers, and very saddening

But my observation is, that the NHS is really only for delivering a broadly-based, rather undifferentiated 'mass average service', which on average will do quite a lot of good - a kind of "hygiene plus"

mass inoculations are a prime example

if what's wrong with you can be (a) recognised fairly easily, and (b) improved or cured with simple measures - drugs for the most part, but other things like re-hydration and rest - then chances are, you'll see the benefit

anything requiring subtle diagnostic detective-work, or a highly-trained eye, or an ultra-tailored course of treatment ... and you're back in the lap of the gods

the parallels with education are strong: take an illiterate population and impose compulsory, fairly decent basic schooling, and you'll raise the average level quite markedly - indeed, you'll effect a trnsformation. Will every child get exactly the customised teaching etc that would absolutely maximise their life chances? No

@Nick: In principle, agreed; but the f-ups here were down to lack of basic skill (hoist usage), care and attention (reading X-rays, monitoring drug combinations, noticing when the patient isn't sleeping) and not following the sugeon's after-care plan (not the only case I've seen).

Ticking boxes is no replacement for vigilant, shop-floor-walking management.