This is a short summary of my feelings after seeing the "address the nation" speech and the other speeches in the South African Parliament; absolutely nothing ever changes there in Africa.

Anyone who has been to Africa will have seen those countries that have “shrugged of the yoke of colonialism” as they like to call it, fail miserably to take advantage of the legacies left by the European settlers.

The scramble for Africa had many faults, the carving up of territories with disregard for tribes was probably the worst mistake, but with exceptions a land sparsely populated then was given a blueprint for a way forward that would enhance their future in a way they could never have dreamed of.

The cry we hear for reparations from African states is nothing more than a hand being held out for endless funds to bolster their total failure to take advantage of that legacy. Certainly Europeans took or made available valuable resources in these countries, resources the inhabitants had no knowledge of or any means to extract or use those resources; it was Europeans that made that possible.

So what happened? For many reasons - greed, personal ambition, the quest for power is all pervading in those countries - graft is on a scale outside the imagination of European politicians. Even relatively minor government officials find ways to squirrel away millions in Swiss bank accounts; and even those who (rarely) are brought to account and jailed or dismissed are immediately replaced by more of the same.

We see Prime Ministers and Presidents from these countries feted on official visits here, politicians who could never legally gain the wealth that they flaunt to the public; yet still they reign, using the power of their parties and corrupt legal processes to build impregnable walls round themselves and their cohorts.

Coincidentally I met one one of these officials when I was working for a client in Bayswater, London. One morning I was outside and the door of the house next door opened and several people came out; all, I discovered, were Nigerian. A smiling man called out good morning and we had a quick chat about the work I was doing next door.

It was only later when talking to my client who owned several properties in the area that he told me who he was and that the Nigerian also owned the property the other side of his: this one always had the curtains closed day and night and is where his “other” wives lived. This was all after this episode that you may remember:

This of course is just another story in a long list of corruption scandals out of Africa. But it is not just corruption that holds the continent back: power is the real driving force to the universal malaise there. Power and the acquisition of it is the bedrock of all political parties everywhere and here as there how that is gained becomes more questionable and democratic with time.

Yet Africa somehow manages to do all this with acquiescence of its people who blindly believe that any change will deliver them from poverty and that whatever happens whitey is to blame. One can’t blame them, for that it is what their leaders have been telling them for years, because they have no other excuse. 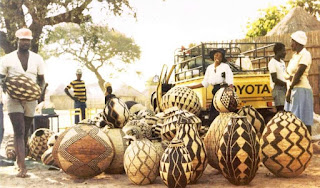 Nothing could be a better example of the above than the maiden speech of Cyril Ramaphosa the new president of SA, finally having ousted the corrupt Jacob ‘I showered so I can’t get AIDS’ Zuma. He starts off his tenure with the popular commitment "land will be appropriated from white farmers without compensation"* giving all the murdering thugs who support the EFF and its leader Julius Malema in the belief he will be the nation's saviour the right to kill and injure white farmers even more than is happening at this time; their choice, of course.

But that route will lead South Africa to the condition of Zimbabwe, and international investment withers on the vine. It does not seem credible that a nation with the resources of SA can disappear down the plughole of incompetence, but sadly once again we are talking about Africa, a continent about to suffer the biggest demographic explosion the world has seen - and they make getting rid of white farmers who feed and export for the nation a priority!

*"We will accelerate our land redistribution programme not only to redress a grave historical injustice, but also to bring more producers into the agricultural sector and to make more land available for cultivation... this approach will include the expropriation of land without compensation.

"We are determined that expropriation without compensation should be implemented in a way that increases agricultural production, improves food security and ensure that the land is returned to those from whom it was taken under colonialism and apartheid."