There is a mysterious illustration on the cover of the 1984 English translation of  Mário de Andrade's book "Macunaíma" (1928):


The artwork is by Rita Loureiro (not to be confused with the Brazilian actress of the same name).

What struck me is the alien feeling of it. It does not look to me like what a European artist might do, and one senses some informed, intuitive connection with the weird subject.

It's not easy to find much about Loureiro on the Web, at least not in English, but this site gives a few biographical details: http://animaelibri.blogspot.co.uk/2011/06/arte-rita-loureiro.html.

According to this, she was born in 1952 in the old rubber plantation town of Manaus, a city in the heart of the Brazilian rainforest (Amazonas Region). [Manaus may ring a bell with you: it's where an Irish fortune-seeker carried a steamship over the mountains, as in the film "Fitzcarraldo."] Loureiro moved to Rio de Janeiro to begin her career as an artist but (if I understand correctly) returned to the rainforest region to develop her art and understanding of the aboriginals/first peoples.

It seems she produced a number of illustrations for "Macunaíma", which don't appear in the English translation and as yet I haven't established exactly which edition (this limited edition from 1984? or this?) of this seminal Brazilian work does contain them, though here are a couple:


There is more of her work to be found here, at the Itaú Cultural centre in São Paulo:
http://enciclopedia.itaucultural.org.br/pessoa1387/rita-loureiro

To me, it seems that an overarching theme or approach is seeing humans in a context full of meaning, whether social, natural or cultural-religious-magical, a turning away from the modern "homeless mind" and entirely in keeping with Andrade's  disgusted view of São Paulo as seen through Macunaíma's forest-bred eyes. 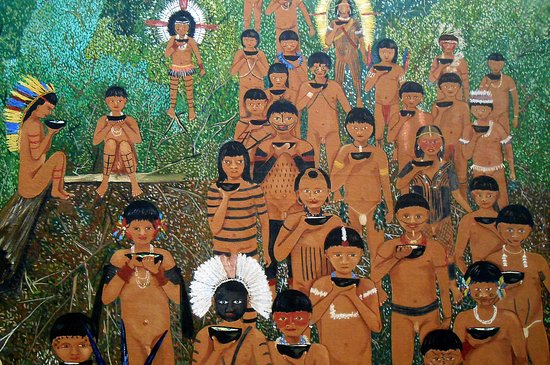 This photo of Pinacoteca do Estado is courtesy of TripAdvisor

That's not to make the savages into hygienised Walt Disney characters; one of Andrade's chapters describes a macumba rite involving nudity, unbridled sex and uninhibited violence against a female temporarily possessed by a demon so that Macunaíma can by proxy inflict his revenge on a rival. Macumba is an umbrella term for a group of religious-magical syntheses - local, African and Christian - see https://www.britannica.com/topic/Macumba.

The Galeria do Largo in her home town of Manaus has a web page on her from her 2006 exhibition there, which also lists some of her previous shows. One of these was "Boi Tema" (Ox Theme) in 1984 and after, turned into a book in 1987. The ox is celebrated in various ways across Brazil, in death-and-rebirth rituals known as the Bumba-meu-boi.  A 2004 guide to Barcelona says that in Brazil, the celebration has its roots in nineteenth century cattle farming there, though of course the ox has ritual significance in many other places in the world; but the same guide refers to a Bantu festival centred around an ox named Geroa; I had thought that the Bantu were in South or South-West Africa but it seems they originated in the angle of west Africa by modern day Nigeria/Cameroon; so quite possibly one of the roots of Bumba-meu-boi springs from the cultural complex transmitted to South America via the West African slave trade.


Like Andrade, then, Rita Loureiro's art is a transmission of the old world's voice to the new and rootless incomers.