Democracy is neither Right nor Left 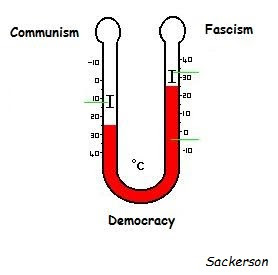 The above video is of a Newsnight opinion piece by David Aaronovitch. He appears to relish sharing with us some morbid calculations by Peter Kellner to suggest that we need only wait for the older generation to die in order to subvert Britain's withdrawal from the EU.

Underneath this, I think, is the illusion that support for democracy is somehow exclusively a feature of the Right - an illusion that many half-wittedly debating these things on social media seem to share.

They may not understand that opposition to membership of the EU was and should still be heartily supported by those on the Left, as well as by Conservative voters, who share a love of their country. It was Macmillan and Heath that got us in; Peter Shore....

... Michael Foot, George Galloway, Tony Benn, Dennis Skinner etc who did and do oppose - on democratic grounds. UKIP itself was founded by Professor Alan Sked (still living and fighting) as a Left opposition to the EU.

I suspect that getting us into the EU (as it now is) was not only a project sponsored by the USA but was seen by certain elements in the British Conservative Party as a lasting solution to suppress British socialism and those pesky unions.* Just look at Heath's simmering rage in confronting a socialist, not so say arrogance and rudeness (not once politely calling Foot "Mister" as the latter scrupulously called him back) in this 1975 TV interview/debate:

We democrats may have our political differences but we are united on the principle that it is the people who should be informed and who should decide. It's not a left-right thing, except insofar that there is a group on the right that thinks (as the Communists do, and New Labour seemed to) the common man should accept being treated like a family pet and shouldn't complain as long as his master throws him some food.

It is interesting, in the video Heaths opening gambit in a video titled Common Market Debate, call sit the "community" and talks of further integration even then, showing how the biggest lie of all was the referendum on joining a trading block.
Of course it was never intended to be just a trading block, the lie itself should be enough for us to claim we were criminally mislead and our membership should be null and void, that of course would be in a sane world which at this moment in time does not exist.

'We democrats may have our political differences but we are united on the principle that it is the people who should be informed and who should decide.'

We will have to repeat this time and time again in the coming year.