China: Scaring away the Nian

As the Year of the Rooster begins, we republish a piece from 2013, about an English teacher who went to a school in Beijing and was promptly plunged into the deep end... 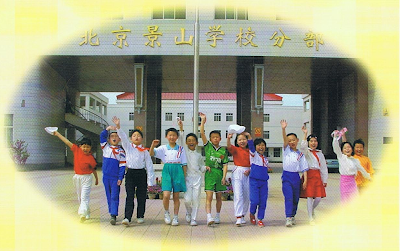 It didn't start off like in the brochure. A few minutes into the lesson, the teacher left Mark alone with nearly 40 Chinese children, some of them with special needs and all of them unable to understand what he was saying. And so: 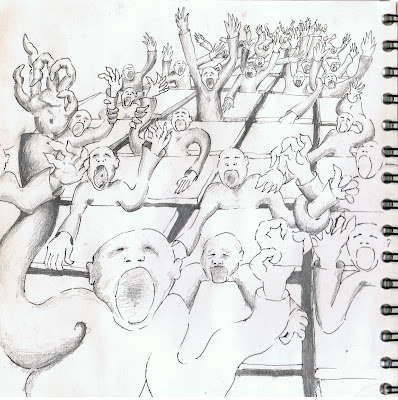 From Mark's end of year report:

"English is being heavily driven in Beijing at the moment [2001-2]. As China is entering the World Trade Organisation, and also has the Olympics in 2008, it is seen as an advantage to the people of China to be able to communicate in English. Therefore the government has introduced measures to encourage this, from Chinese/English signs on streets, English language development programs on T.V. and radio, and Chinese/English publications. English is compulsory at [the] School from grade one through to senior two.

"However with China having a low percentage of non-Chinese people living or working in China and Chinese people generally not travelling outside of China, often communication with even English teachers in English can be difficult. The standard of written English is of a much higher calibre than spoken English, and English speakers' vocabulary is at a disproportionate level to the fluency with which they can use it."

The Chinese teachers at the school "followed a textbook and expanded on this where they felt it necessary," but allowed the four foreign Oral English teachers complete freedom to use their own methods.

Mark saw that there was a wide range of ability within the class, and no particular strategy for meeting the needs of the special needs children within it. Also, art was not a highly valued part of the curriculum. So his plan was English through Art: flags, maps, weather, animals, masks, cars - and doors and walls, as seen down the hutongs: 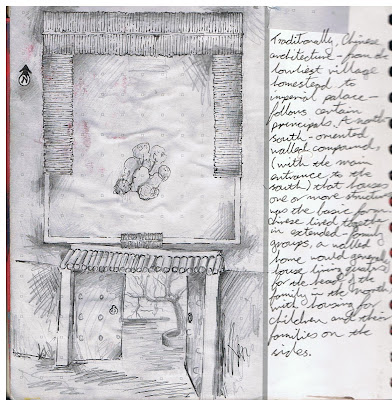 "When you stray off the main streets anywhere in the sprawling city of Beijing you can find yourself on the back streets where the humanity of Beijing reside. These alleyways, streets and back ways are affectionately referred to as 'Hu tong', they hustle and bustle with life. Whole families can be seen dodging in and out among bicycles incredibly overloaded with a three-seat sofa or cases of cabbages, open air hairdressers comprising a woman, a kitchen chair and her scissors. Life goes on past ornate and fascinating doorways, walls and architecture. What lies behind these doorways? What further dramas go on behind closed doors? Events probably not dissimilar to the family life of any household in Britain.. Often they open onto clutter, ever present bicycles, or occasionally a serene and peaceful scene, where a lonely cherry blossom tree stands central within a sunlight dappled and always dusty haven from the hustle on our side of the door."

Many of these ancient living areas were even then being cleared for modern urban projects, the former inhabitants moved far away from their jobs, local markets and lifelong neighbours.

The classroom learning continued with quizzes and games, and magic: Hallowe'en and Harry Potter, Hangman, the Hokey Cokey and Quidditch: 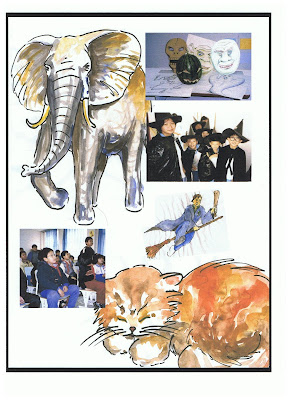 And celebrations, including Christmas and the New Year:

"January is a magical time in China. The Spring Festival begins with a bang for the Chinese New Year, with fireworks and lights filling the sky, almost overwhelming the eyes and ears. Chinese spring festival is a traditional holiday when people attempt to scare away mythical beasts, dragons and Nian. Nian is a mythical wild beast that preys on humans. So people light fireworks and hang lanterns to ward off Nian and keep it away from their homes.

"At this time of year homes and buildings are decorated with beautiful lanterns. The light builds to a zenith for the Lantern festival held on the fifteenth of January in two thousand and two (dependent on the Chinese lunar calendar). Lanterns come in many different colours and designs, producing a magnificant spectacle when evening falls and the lanterns bring the darkness to life."

The teaching style at the school was formal and could even be quite physically tough sometimes, but the staff felt they had something to learn from this more creative and playful approach. And so did the children: 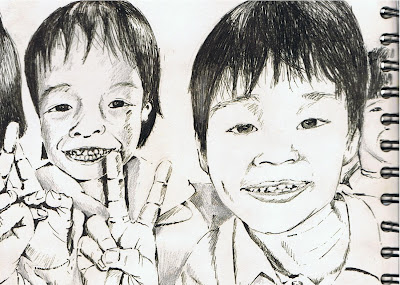