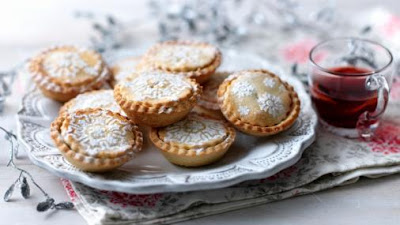 As most of us must know, mince pies are the point of Christmas. Admittedly Christmas has become tangled up with manic shopping and sentimental twaddle about a guy in a red suit, but that is merely fluff and nonsense. Mince pies are what Christmas is all about. Years ago there was some religious stuff too, but that seems to have given way to the powerful rationality of the mince pie.

Unfortunately our finest mince pie experience came via my late mother-in-law so now we have to make do with second best, but that does not invalidate the pie's primary role at this time of year. So far we have sampled the produce of Sainsbury, Tesco, Granddaughter's play centre and a Matlock cafe.

Obviously it is early in the mince pie season and we intend many more samplings but at this stage it is worth mentioning that Tesco Finest were not particularly fine. Too sweet and not enough spiciness.

Sainsbury's Taste the Difference were not bad. Good texture, not too sweet and moderately spicy. They were still supermarket pies though.

Granddaughter's play centre pies were probably Mr Kipling with all that this implies. At least the coffee rinsed the gunk off my teeth.

The Matlock cafe pies looked as if they came from a local bakery and were pretty good. Good texture, not too sweet and quite spicy. They didn't look as perfect as machine-made pies which ought to be a good sign.

So all in all not a bad early kick-off for the mince pie season, but it's a pity neither of us is an expert baker. Maybe we'll try Lidl next.

... but Bakewell's better. All the different Bakewell tarts are the original.

Sackers - they insist on calling them puddings in Bakewell.

Please allow me to introduce an heretical note by singing the praises of the Ecclefechan Tart - those made by Sainsbury are pretty good.

And I must also insist that it is Bakewell Pudding "as any fule kno".

Wildgoose - I sampled Ecclefechan Tart in a cafe not far from Bamburgh. It was excellent with coffee.