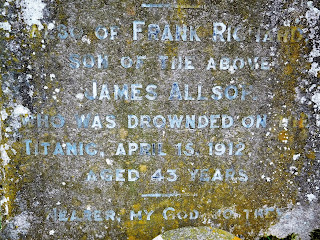 Part of a gravestone at St Mary's church, Tissington. It records the death of Frank Richard Allsop aged 43, a saloon steward on the Titanic.

Mr Frank Richard Allsop, 43, came from Devon England. When he signed onto the Titanic he gave his address as Obelisk Rd, Southampton (elsewhere recorded as Woolston, Hampshire). His sister, Mrs H. McLaren was a stewardess on the ship.


Frank's death is recorded on his father James' gravestone as his body was not recovered. 'Drownded' seems to be a dialect word, never particularly common although I've heard it a few times. 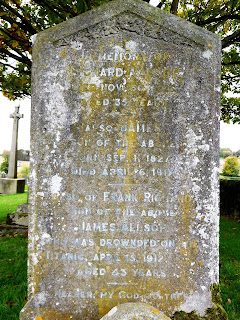 I think you see the word in Mark Twain.

Sackers - you do. Also 'drownding' somewhere. Hardy and Dickens also used it as a dialect word.