Fiji: Bainimarama has a tiger by the tail 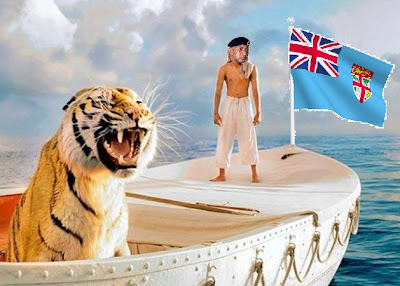 All in the same boat
Friday's Daily Mail article about the vicious mistreatment of escaped prisoners in Fiji is throwing sparks into the parched political underbrush. Although the story - based on a widely-viewed YouTube video uploaded on 4 March - appears to relate to events from last year, its publication comes at a very sensitive time, as the militaristic Bainimarama regime prepares to introduce a new Constitution. The mainstream coverage is now feeding back into local blogs like this one.

Washington-based consultants Qorvis have been working with the Fijian Government. In the face of this latest PR disaster they have yet to issue a public statement, but the day before the Mail piece came out Fiji Sun journalist Graham Davis was playing down the incident, placing it in the context of the long-standing culture of physical violence in Fiji and referencing similar police outrages in Australia, South Africa and the USA. Buried in the footnotes is the disclosure that he is a "regional adviser to Qorvis" (since when?)

Davis' spinning is a little too enthusiastic, perhaps, describing the September 2012 Naboro Prison breakout by five inmates as seeing "much of Suva terrorised" and opining that "many law abiding Fijians actually like being ruled with an iron fist if it means being able to sleep soundly in their beds at night". But thanks to past British interference, particularly in the matter of importing thousands of indentured labourers from India under terms that ensured most would settle permanently, Fiji is racially divided and prone to coup and counter-coup. In its way, it is the Northern Ireland of the South Pacific.

Accordingly, Australia is warning travellers in Suva to "exercise a high degree of caution"; New Zealand says "there is some risk to your security"; the USA advises "exercise caution" and "avoid demonstrations and large crowds, remembering that even peaceful demonstrations can turn violent unexpectedly."

The UK is more sanguine ("No restrictions in this travel advice") while counselling that "travellers should exercise caution and monitor the local situation for developments. Avoid all political rallies and avoid openly discussing political issues." Good old FCO; doubtless Our Man in Suva will be on hand with tea and crumpets for stranded Brits when the war-clubs get pulled out of the thatch. But the prize for innocence abroad goes to the Saturday Evening Post's travelogue "Fabulous Fiji", which keeps its goggly eyes focused on kava, coral and cannibalism (rendered cute by time).

Back in the real world, Qorvis declares on behalf of its client that "The Government, under the leadership of Prime Minister Josaia Voreqe Bainimarama, is currently in the process of drafting a new constitution, one that will enable the country's first-ever truly democratic elections: one person, one vote, one value." The "path to true democracy", as it calls this, has a road-block in the form of the regime's January decree on party political registration, designed (illegally in the opinion of international lawyers) to exclude much of the opposition including Mick Beddoes, leader of the United People's Party until the decree banned it (and the Fiji Labour Party is similarly threatened, according to the same link).

Another block to progress is the fact that the government scrapped a draft Constitution in the same month, after nearly a year of consultation. The proposed arrangement would have restricted the powers of the military. The regime has designed a version more to its own liking and Commodore Bainimarama says the new draft is now before him and will be submitted to the Constituent Assembly once the "bit of a problem with the registration of political parties" has been resolved.

The situation is decidedly ugly. Thousands of Indian descent have fled Fiji in the turmoil of recent years, and ethnic Fijians have more than doubled their numbers since 1966. The immediate postwar ethnic balance (about 46% each) has changed to 57% Fijian / 38% Indian. The perception of Bainimarama as heading a dwindling and partisan minority makes the task of reconciliation extremely challenging, especially when the incumbent President seems determined to use methods calculated to inflame his domestic opposition and defy foreign legal and media opinion.

Some current blogs and sites:


Most of the above are anti-government - please help us if you know of others that will serve as a counter-balance.

All original material is copyright of its author. Fair use permitted. Contact via comment. Nothing here should be taken as personal advice, financial or otherwise. No liability is accepted for third-party content, whether incorporated in or linked to this blog; or for unintentional error and inaccuracy.

You should take part in a contest for one of the best blogs on the web. I’ll recommend this site! brooklyn movers
apartment movers

Very informative and trustworthy blog. Please keep updating with great posts like this one. I have booked marked your site and am about to email it to a few friends of mine that I know would enjoy reading. Real estate