"Consent has not been given" - the EU and cross-party collusion 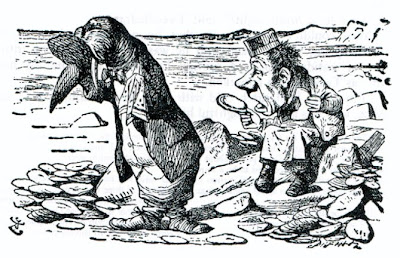 'It seems a shame,' the Walrus said,
'To play them such a trick,
After we've brought them out so far,
And made them trot so quick!'
The Carpenter said nothing but
'The butter's spread too thick!'

I was recently doorstepped by your colleague John Hemming MP, now that my address falls into the Yardley constituency, following recent changes by the Boundary Commission.

Mr Hemming asked whether there were any issues I would like addressed, and my immediate response was Europe, and when we would be allowed a referendum on our membership. He referred me to his support for EDM 20 (18.11.2009) and this, coupled with his courtesy in actually asking for my vote and opinion in person, are factors that, ceteris paribus, would persuade me to vote for him in the next General Election.

Many thanks for your email to Nick Clegg MP. Nick has asked me to contact you on his behalf. I apologise for the delay in responding but I hope you’ll understand that, due to the sheer volume of correspondence that Nick has been receiving, it can take some time for us to reply.

Liberal Democrats understand that EU membership is controversial and that many people have concerns about it. However, we believe that membership is vital to Britain and we would point out that an exit would be very far from cost-free. It is true that countries such as Norway and Iceland, by virtue of their membership of the European Economic Area, have access to the single market without EU membership: but they have to pay for it. EEA countries pay into the EU’s funds, as do members, but have no ability to amend or change the laws which are enacted at EU level except, in theory, an ability to reject outright – which would be a potential occasion for the EU to terminate the EEA agreement. This is no real choice – simply a requirement to implement most EU laws without a vote on those laws. This is not a model Liberal Democrats want for Britain.

However, we also recognise that the European Union has evolved significantly since the last public vote on membership in 1975. Liberal Democrats therefore remain committed to an in/out referendum on EU membership the next time a British Government signs up for fundamental change in the relationship between the UK and the EU. This is the vote on Europe that really matters – not a dishonest vote on any particular treaty, but a chance for the European question to be settled once and for all.

Thank you once again for emailing.

Thank you for your courteous and detailed reply.

Your para 2 gives one side of the argument, which is fine, and I'm sure there are arguments to be made on the other side also. The thrust of my question is not primarily about for and against EU membership; if we had an honest debate and a referendum, I would abide by the result of the people's decision, whichever way it went.

In my view, this is the biggest constitutional shift since 1688. The issue is so great that it cannot be limited to an imprecisely-worded rider to a raft of manifesto commitments and aspirations. The fact is, we haven't been asked and the status quo, half in and half out, is one we have come to without proper democratic authorisation. It is like finding oneself being married by proxy, without banns, vows or exchange of tokens. Consent has not been given.

It is nothing like adequate to promise a vote "next time" there is some "fundamental" change. You will be aware of the ratchet-like legal process that has already commenced, and the way in which EU Commissioners and others find their positions and pensions conditional on their active support of ever-closer union.

From the street, it looks as though all three major political parties have colluded to repudiate democracy, and some would say that the political class as a whole has therefore lost the moral right to claim to represent us. This disconnection between rulers and ruled, together with the growing gap between the financial class and the consumers and workers they have abused, may threaten economic and social stability within the next generation.

I simply cannot use my vote to legitimise any party that refuses me a vote when it most matters. The LibDems appear to take the franchise seriously, with your call for the STV/Alternative Vote, and you have worked hard to build connections with local communities; why so shy of a referendum?