Here is the news

Lead story on Classic FM news this morning: "It looks like Britain's heading for a recession."

Where does the news come from? Is it any use? Other than weather forecasts, the last usable information I can remember is from the summer of 1987, when I learned that Sir James Goldsmith had sold all his shares on the Paris Bourse, which confirmed my feelings about the way the market was going - but that item came from Private Eye magazine.

December 1, 1978: publication of the Times and Sunday Times suspended for 11 months. During the journalists' industrial dispute, a spoof paper comes out, called "Not The Times". At that time, a strap line for the Financial Times was ""Don't you wish you were better informed?", so the send-up featured a picture of a steam locomotive that had crashed right through the wall of a railway terminus and down onto the pavement beneath, with the headline "What could you have done, had you been better informed?" 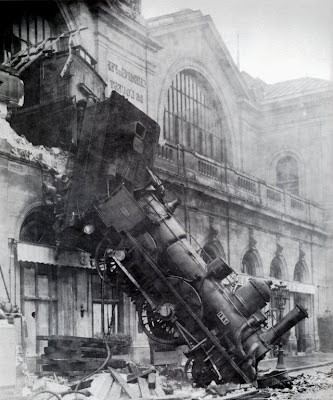 Useless, or trivial. As the Poet Laureate Alfred Austin wrote about the terminally-ill King Edward:

"Along the wire the electric message came,
He is no better, He is much the same."

So, who determines the news agenda? Are journalists much cop any more? Are they allowed to be?

I learned that Sir James Goldsmith had sold all his shares on the Paris Bourse, which confirmed my feelings about the way the market was going - but that item came from Private Eye magazine.


There is no "but". That organ is well known for having the resources to sniff out some humdingers. Trouble is, they are in amongst the other quality fare.

My sister is a journalist, but stays away from the nationals. She points out that the big papers get all their real news from Reuters and the local papers, then work it up into a much bigger story. They don't employ many real reporters or journalists - its too expensive. They prefer talking heads that can offer news-views which add a narrative to a story dug up by someone else and which matches the editorial line of the paper.

My sister also tells me that the papers have dirt on almost every public figure, but they CHOOSE who to turn over. This gives them enormous power over those that they chose to support - they can make you king one day and pauper the next. You can see they do this all the time with celebs, building them up one year and tearing them down the next, but we never imagine that they employ the same tactics with politicians - but they do.

She used to tell me all the tactics that papers would use to tell a story their way with their own spin on it. For instance, how often have you seen a phrase along the lines of "A spokesman said"? No name given. Why? It means the line was made up by the writer and attributed to someone real to give it substance. "A spokesmon", "unnamed sources", "A source within the Labour party" etc etc etc. Yes, they may all refer to a real person - but they could just have been made up by the journo to get his opinion across whilst making it sound like he has his finger on the pulse.

She showed me a story that she sold to the Guardian for £50. It was one column inch. The Guardian worked it up to half a page - all of it made up and based on opinion. She was pissed off: "I should have got £2500 if the story had really been that big!"

Take a story, remove the bits that are attributable to named sources - and what is left is usually made up. The attributable bit has probably come right from Reuters. That's why I don't read papers anymore and rarely watch TV news. Its 90% made up by wet-behind-the- ears kids that know nothing about the world we live in but make up a narrative for the news that suits their editor.

James: wish there were more like them, and published more widely. Ryan: Thanks, very interesting.