In which I accept my own challenge: (http://theylaughedatnoah.blogspot.co.uk/2017/03/eu-gb-writing-challenge.html): 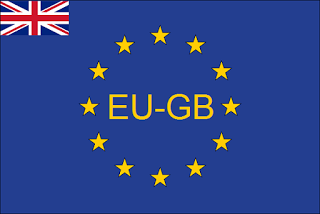 From “The War In The North” by Prof. Noah Williams, Monash University Publishing (2nd edn, 2042)

"…The background to the conflict in the Eastern Mediterranean was as complex as in the years leading up to WWI, and as full of dangerously tempting opportunities for lower order players. Over a long time, Turkey’s President Yildiz pitted greater Powers against each other with all the wiliness of, and considerably greater resources than, Malta’s Dom Mintoff in the 1950s. For Turkey stood over the crossroads of history.

Following the destruction of the Highland Regiments at Dnipro[i] (the first moment when the use of battlefield nuclear weapons was seriously contemplated), Europa resiled from its policy of progressive eastward enlargement and the Ukraine was finally allowed to split into West Ukraine and Donbass, largely along the linguistic and racial outlines that had long existed.

It seemed as though an uneasy but mutually beneficial balance had been achieved. The abandonment of imperial ambitions in Ukraine allowed Europa to redirect its attention southwards to the African littoral, and Moscow’s now-heavy protection around the Soyuz and Blue Stream pipelines in Donbass was not only a safeguard for Russian economic interests but also insurance for Europan consumers against terrorist disruption to their energy consumption.

However, the Odessa Treaty also tightened the Russian hold on the Crimea and the eastern end of the Black Sea. To the infrastructure built up at Sochi under the cover of preparations for the 2014 Winter Olympics had been added similar developments further up the coast at Novorossiisk and Anapa, while under another pretext (guarding the projected South Stream Pipeline, a project that was never definitively cancelled but remained on the back burner) the port at Sevastopol had also enjoyed considerable improvement. The surreptitious nuclear hardening of certain underground buildings at all four sites had been carefully noted by the West, but without public comment.

The situation became unstable when Russia started to strengthen its links with Greece. As in Blair’s Britain, the Greek economy had been hollowed-out after joining the Eurozone. Irrecoverably in debt and suffering massive unemployment and the withering of essential public services, Greeks remembered that they had nearly installed a communist government a century before, and warmed to the approaches from the now-nationalist but also socially-sensitive Moscow regime. There had been talks about a spur from South Stream through Greece, headed off by Europa and a nervous US State Department, but the alternative Trans-Adriatic Pipeline (TAP), though it ran to Thessaloniki via Turkey, was bringing gas from Azerbaijan, which was part of the nascent Eurasian Economic Union sponsored by the Russians.  The cafes and hotels of Thessaloniki prospered as foreign agents developed their contacts and spied on each other.

Less obvious, yet for that reason possibly more effective, was the de facto intelligence hub of Alexandropouli, 300 km to the east and correspondingly closer to the Turkish border and the Sea of Marmara, in turn the gateway to the Bosphorus and Black Sea. Then there was the listening station built at Mount Athos under the feet of the Russian monks of Panteleimenos, which President Putin visited in 2006 and again a decade later. It was rumoured in intelligence circles that some advanced short-range weapons had also been assembled and stored there. A CIA joke was that one could see Spetsnaz boots under the Orthodox robes.

Amid these clandestine manoeuvrings President Yildiz saw a chance for his aggrandisement.  The rapprochement between the Greeks and the Russians had enhanced the importance of Turkey in bottling up the Muscovite genie. Russia had limited Turkey’s military ambitions in Syria in the mid-2010s but was less interested in the migrant flow through Turkish territory. These unfortunates, some fleeing conflict zones and others the poverty of Pakistan, Afghanistan etc could be weaponised. The 1951 UNHCR Refugee Convention required signatories to offer shelter to refugees in the first safe land to which they came. Europa was now one country, and under pressure from the US State Department had conferred associate status on Turkey. Yildiz realized what this meant: since the Convention did not specify where within that land they had to be accommodated, refugees could be forwarded en masse to anywhere in Europa.

Berlin was reluctant to accept a further influx into the sub-territories of Germany, France, Bulgaria etc because of the political consequences, not least the rise of right-wing and secessionist parties. However, the impoverishment of Britain that had already resulted in the sale of the Channel Islands to secret consortia of billionaires meant that Westminster was prepared to accept responsibility for “Yildiz’ sheep” if money were provided for the building of facilities and crucially, the creation of employment for the local population.

The money would come from Europa and would not benefit Istanbul - but that was not what Yildiz wanted. He wished to eliminate the expatriate Opposition who had been given sanctuary in Britain. Threatening an unlimited number of trainloads westward via the Bosphorus  Express and Channel Tunnel, he secured an agreement to issue Europan Arrest Warrants for the return of the dissident Turks in sealed trains. The British police forces were unhappy and made representations to the National Government, but were overridden by a Presidential decree from Holzhauer.

Had it ended there, in Western shame and the blood of hundreds of innocents, the Continent would not be the wasteland it is today. But unsuspected by almost everybody, Yildiz turned out not to be merely a secularist: the Mahdi planned to go to Damascus…"


[i] This led to another attempt, this time near-successful, at secession from Europa by the Scottish National Party-led Government in Holyrood. Berlin’s response was the forcible replacement of the Sturgeon administration by Mackintosh’s Coalition. Lacking any support from the Nationalists, the Coalition quickly proved unable to maintain its authority locally and capitulated to the reintroduction of regional rule from Westminster.