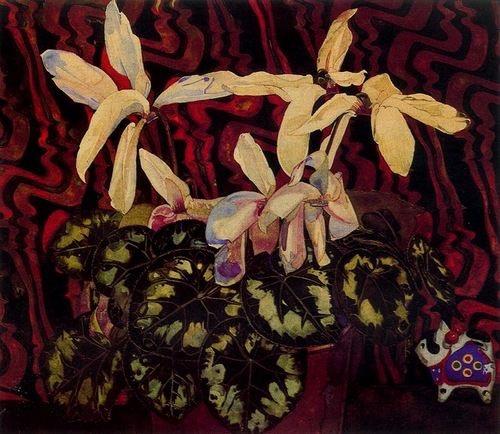 Charles Rennie Mackintosh is an icon of design - his style is unmistakable and his name synonymous with art nouveau.

Born in Glasgow in 1868, Mackintosh had a prolific output of work throughout his life across many spheres, from designing some of the most influential architecture of the 20th century to creating a whole new language of interior décor in everything from stained glass to textiles, from art schools to high backed chairs; but Mackintosh is little known as the gifted painter that he was.

Painted between 1922 and 1923, 'Cyclamens' breaks with Mackintosh's iconic stylised designs, being a vivid yet realist piece that looks more like oil than its true medium of airy watercolour. The giveaway of this painting's origin is the artist's delight in pattern and surface design, the rich swathes of crimson backdrop here resembling a Mackintosh textile swatch. The piece is a melting pot of organic abstraction, even the cyclamen leaves contorting with pattern until reality is reasserted by the stark white blooms. The deep background makes the pure petals shine like silver on a dark Scottish winter night, yet the picture was painted in southern light, Mackintosh having fled from Glasgow to London.

It seems there may be a deeper, symbolic meaning to what appears to be simply a decorative still life... Mackintosh was part of a group of likeminded artists and designers in Glasgow known as 'the Four', the others being the designer Herbert McNair and the artist sisters Margaret and Frances Macdonald.

The group were bound together not only by work but also in their personal relationships, Margaret becoming Mackintosh's wife and Frances marrying Herbert McNair. Also named the 'Spook School' for their eerily elongated style, their use of Celtic imagery bled into their paintings and decorative style, drawing from the natural world like botanists.

Within the wider association known as the Glasgow School, they were also part of a slightly larger circle called “The Immortals”:

The swooning virginal petals of Mackintosh's cyclamens remind one of 'the Immortals' as they appear in early photographs, languorously nymph-like in Edwardian white dresses set against open Scottish fields. The petals of the two upper cyclamens touch as though in reluctant parting, like the hands of Janet Aitken and Katherine Cameron.

The year before 'Cyclamens' was painted Frances Macdonald, Margaret's sister had died. Her husband Herbert McNair was distraught, vowing never to paint again and burning most of his wife's work. Looking at the piece in this context, one wonders if Mackintosh might have been alluding to the loss of Frances from the Immortals - cyclamens are one of the few plants to flower during the cruelest months of winter, defying cold death with their white buds, and signalling new life. The Four's delight in Celtic imagery and symbolism allows room for such an interpretation, especially bearing in mind Victorian flower language, where cyclamen means resignation and 'goodbye’.

However, another farewell may be intended. 'Cyclamens' was painted two or three years after Mackintosh’s final unrealised designs for studios in Chelsea, his last completed commission having been six years earlier with the dark, jazz-age remodelling of 78 Derngate, Northampton. Perhaps it is not so much an allegory of the lost immortals, of Frances' death and McNair's dissolution, but instead the end of Mackintosh's prolific career and artistic vision. The parting touch may be a symbol of Mackintosh's defeat, closing the door with sadness on his past magnificent success before moving to the South of France, living there in poverty for the last of his days and never realising another large-scale project.

We can only guess at the enigma of Mackintosh's true meaning in this piece, knowing only that it's decorative allure is not as elusive as its symbolism. 'Cyclamens' brings Mackintosh's career to its crescendo as both artist and designer, with a creative output that could never die, like the dancing cyclamen blooms and the beaming eyes of 'the Immortals'.

"This is our Centenary Year and we have a special exhibition "Charles Rennie Mackintosh & The Great War" - ( 78derngate.org.uk/whatson , ) - the largest display of Mackintosh design in England, until 29th April. If you or readers are able to visit, a warm welcome awaits."

I was fortunate to have owned a Mackintosh high back ladder chair that adorned our entrance hall for many years, it was sadly wrecked whilst in storage and never replaced.
so much of his work had a long lasting influence and his Glasgow school of art building remains a testament to that, but whoever was responsible for the new building that overshadows it should be shot as should those on the school board who thought it a good idea, everything has its place but not this, see for yourself.
https://www.dezeen.com/2014/03/06/glasgow-school-of-art-reid-building-steven-holl/

I'm always interested to read something new on one of my longtime favourite artists - CRM - so thank you!

If I may, I'll be cheeky and leave a link to my own post about CRM:

@Wiggia - I see what you mean. Brutalism not dead.

There is indeed, as you say, a 'deeper symbolic meaning' to the painting as you noted in the title, Secret Valediction. I think the group would have been better educated than any similar group today and they would have been well aware of the various myths/legends/symbolism associated with cyclamen and would know that it means resignation and 'goodbye’; appropriate in the circumstances.

As usual, I look at a painting and think 'how did he do that, get that effect?' I think it could be possible to copy it using watercolour paint from tubes but I'm not sure if tubes of watercolour paint were available at that time. I would love to see the real thing.

I hadn't previously paid much attention to CRM's flower paintings but he seems to have done quite a lot of them. I found this page - https://www.posterlounge.co.uk/artists/charles-rennie-mackintosh/ and if you scroll down to 'Floral and chequered fabric design' you can see that CRM anticipated 'op art'!

Excellent and informative post and I agree with Wiggia about the carbuncle opposite the Glasgow School of Art. CRM must be spinning in his grave. The post-modern architect's relationship with the urban environment is that of a dog with a lamppost.

I have an obscure angle on the house in Northampton: it was visited by a great aunt of mine (Margaret Bondfield, first woman Cabinet minister) and George Bernard Shaw, when campaining (for, ahem, Labour - in a by-election there, I believe). An interesting lady, one day I shall write about her