Hard on the heels of the $700 billion US bailout bill comes the UK's £400 billion rescue plan.

Oddly, this latter figure, in dollar terms, is very similar to the one approved by Congress - a little over $692 billion at today's retail conversion rates (and even closer in wholesale terms).

But the really interesting thing is the difference is in its relationship to the size of the population of the country, and the GDP: 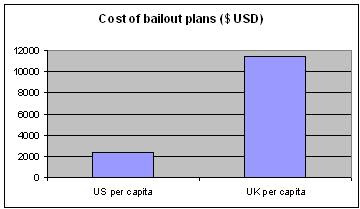 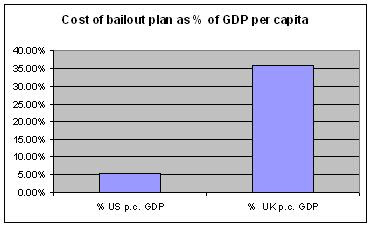 Marc Faber recently said that the US needed $5 trillion to resolve the crisis, i.e. 7 times more than the amount approved by Congress. Britain's bailout fund is proportionately 7 times greater, and so, crippling cost to the taxpayer aside, maybe it could work.

And it has political implications. The average Brit is so innumerate that he doesn't know how to calculate 75% of 100, so don't expect him to understand that it wasn't simply "the banks" to blame, but the relaxation of Government monetary controls. Don't discount the possibility that, however undeservedly, Gordon Brown may win the next election.

Fortunately (if you don't like GB) I think that the GBP (Great British Public) are not going to have enough time before the election in 2010 to see any benefits from this bailout. In fact I suspect the benefits (it it works) will be invisible - ie preventing really bad things from otherwise happening to the financial system. In the real economy things are still going to be very rough, at least as bad as 1990-93, for the next few years. Remember John Major didn't get the benefit from the 1992 devaluation, and it took 3+ years for any "feelgood factor" to arrive. The GBP are normally the last to feel the effects of economic growth, and the last to notice the downswing as well.

Good news then, sort of, Sobers.