Meghan distracts us from our loss of civil liberties

I don't care what the weatherman says, as Louis Armstrong sang. https://www.youtube.com/watch?v=YQBfYZcBSPA Even Piers Morgan can't be wrong about everything, and when weathermxn Alex Beresford attempted to lecture him on his failure to collude with the mythology Meghan is trying to construct around herself he walked off set (see below - had he planned to do so all along?), dogpiled with 41,000 complaints from the gullible public.

The Duchess has been tapping into the Dianolatry that subsequently shook the Monarchy on the Princess' death in 1997. This photo collage doing the rounds on Facebook makes the point: 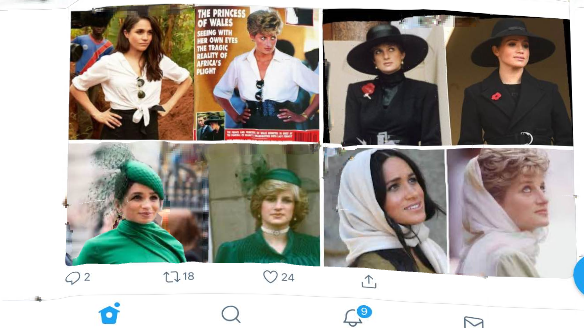 Not only does this 'mess with the heads' of the sentimental among the populace but it may serve as an extra hook into the psyche of Prince Harry, who aged twelve lost the beautiful mother that Meghan has been mimicking.
How much further will she take it? She has already driven a wedge between Harry and his brother, and cost him the Captain-Generalship of the Royal Marines (earned not least by his brave service in Afghanistan.) Heaven forbid she continues Diana's trajectory into marital difficulties, but we have already seen Oprah Winfrey cast as Martin Bashir, interviewing the poor, put-upon victim of alleged Palace bullying.

In Meghan's case, the 'third person in the marriage' has been the camera, starting long before the ceremony; I could wish that when filmed and photographed she looked at her husband more than, and with at least as much love as, at the lens.

Mention of the ceremony leads us to the couple's claim to have been married clandestinely three days before the Windsor Castle celebration; a claim at first passively reported in the news media passim - perhaps another example of how much journalism has become internet copy-taking by cub reporters:

'... We called the Archbishop and we just said, look, this thing, this spectacle is for the world. But we want our union between us, so the vows that we have framed in our room are just the two of us in our backyard with the Archbishop of Canterbury...

Pace Oprah's uncritical complicity with her interviewees, this assertion bears on the Duchess' truthfulness and so lends weight to Morgan's assessment; for the 'pre-wedding wedding' cannot have been valid.

In this country (excluding Scotland) a wedding must take place in an authorised location and inside a permanent structure (not, for example, in a marquee); no such outbuilding appears to be in the 'backyard' of Kensington Palace's Nottingham Cottage. The public must have access to the venue, and there must be at least two witnesses; neither requirement appears to have been fulfilled. Also, where was the advance declaration?

The Arhcbishop of Canterbury has maintained silence on this matter, presumably unwilling to be seen to contradict the Duchess, though this has not prevented her father from characterising her as a 'liar' https://www.newidea.com.au/meghan-markle-dad-letter-sue-documentary-court-case or her half-sister Samantha from calling her a 'narcissist' and 'sociopath.' https://www.news.com.au/entertainment/celebrity-life/royals/meghan-markle-unloads-on-fathers-betrayal-and-unknown-halfsister-samantha-markle-fires-back/news-story/536199aab9dd492c2e1e28ab92fea484

Let us be charitable and say it was a 'stretcher' - a misinterpretation, deliberate or unintentional, of some rehearsal or blessing - rather than a complete fabrication; but in a courtroom it would damage the credibility of her evidence generally. 'Recollections may vary,' as the Palace's depth-charge phrase has said. https://www.express.co.uk/news/royal/1407379/Royal-Family-latest-Queen-response-meghan-markle-prince-harry-interview-end-of-monarchy However, the Prince was ready to back her up - a readiness guyed by Black Country comedienne 'Doreen Tipton':

I would pay good money to see the pair interviewed again, but this time by the mercilessly interrogative Judge Judy. https://en.wikipedia.org/wiki/Judge_Judy

Meghan won't win in her attempts to destroy the Monarchy, though, if that's what she's after rather than a Tinseltown career as 'wronged woman.'

Among the many reasons why is the existence of the Privy Council, that secretive and autocratic organisation to which the real power of the country has been devolved for centuries and of which all Prime Ministers and Cabinet ministers are automatically members. No Crown, no Privy Council.

No outsider will be allowed to throw a spanner into the engine, with its almost unlimited potential for arbitrary power; a capacity explored by an unscrupulous Tony Blair and his accomplices as soon as New Labour hit the ground running, starting with the meeting on 3 May 1997 that gave the PM the right to nominate three people to give political orders to the Civil Service https://www.whatdotheyknow.com/request/247039/response/605821/attach/3/3%20May%201997%20Civil%20Service%20Amendment%20Order%20in%20Council%201997.pdf?cookie_passthrough=1.

Tony Benn warned many years ago - and I'm sorry not to have the link - that our freedoms could be swept away in an afternoon by Order In Council. That magic wand, plus Blair's Civil Contingencies Act 2004 https://www.legislation.gov.uk/ukpga/2004/36/contents and the increasing use of secondary legislation has seen a coup against British civil liberties that has led - under an allegedly Conservative PM - to the entire country being held under open arrest and a prey to overempowered uniformed prodnosing and bullying.

The Hollywood Princess has no idea what she has taken on, and she can save all her posturing and bloviating for the mirror, mirror on the wall. For our part, we need to turn away from this frivolity and address the loss of our habits of liberty that we misunderstood as our inalienable rights.

Most of my difficulties in life have arisen from the failure of others to take me at my own estimation. They really ought to be ashamed of themselves. And they haven't given me a pony.

The whole mess has even prompted a big New York Times piece talking about the abolition of the monarchy.

You only have to see an idiotic comment from Billary, to start to ignore the whole shebang, and get on with something more important, like a little weeding around the PSB, and checking the broad beans...