Arcadia: told you so 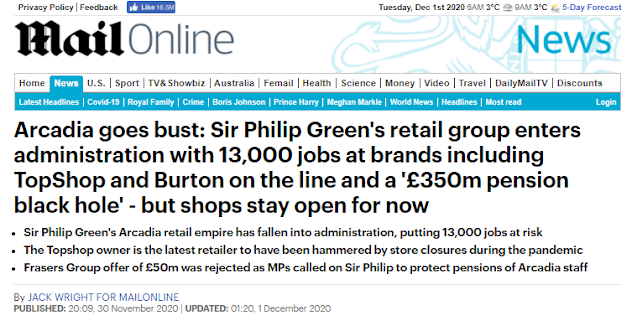 BBC economic journalist Robert Peston recently professed himself "nauseous" on reading of the paltry £9 million per head earned by the hapless Rover Four; yet when I read his book "Who Runs Britain?" this year, I failed to see him confess a similar gut reaction to Sir Philip Green's £1.2 billion dividend raid on Arcadia Group. (Actually, the money went to his wife, who is domiciled for tax purposes in Monaco, but that hardly improves the flavour.)
At the time, this monster cash extraction (done with freshly borrowed money) was more than three times Arcadia's operating profits, but I'm sure the banks that (expensively) approved the loans didn't care. And it was legal.
However, if, in the economic downturn, turnover and profits are savaged, and tangible assets decline sharply in value, and Arcadia becomes very weak, or even goes bust, what will Peston say then? Arcadia Group employs 27,000 people; was it really OK, other than in a strictly legal sense, to put such a heavy yoke around its neck? Had the dividend not been paid - and especially, not been funded by humungous bank loans - what more might the group have achieved? The consolidated balance sheet for 31 August 2008 is here; what will the 2009 one look like?
What are the implications for our so-called democracy when captains of industry become so gigantic, and the rest of us become relatively as insignificant as crablice?
___________________________________________________________________________________
11 years later, we can ask whether Arcadia would have been more resilient (1), and in due course Mr Green and hs wife much richer (2), if instead of financial extraction there had been reinvestment, expansion and diversification.
(1) 'The group’s brands had been suffering from years of underinvestment before the Covid pandemic and had failed to keep up with the switch to online selling and digital marketing':   https://www.theguardian.com/business/2020/nov/30/philip-green-arcadia-group-collapses-into-administration
(2) https://www.theguardian.com/business/2020/dec/01/philip-green-wealth-arcadia-fortune

There is also the questionable sale of BHS to a serial bankrupt in Dominic Chappell for a pound, the stench of that deal still hovers over Philip Green.
No one can say for sure whether Green saw the light and extracted what he could when he could or that his'magic' touch in retail had just run its course, I know what I think and expect others do as well.