Covid and Power, by Sackerson

Here we are in Week 40, the first of the 2020/2021 winter flu season. After all we’ve been through so far, there are still revisionists downplaying the threat of coronavirus, so let’s review the situation. 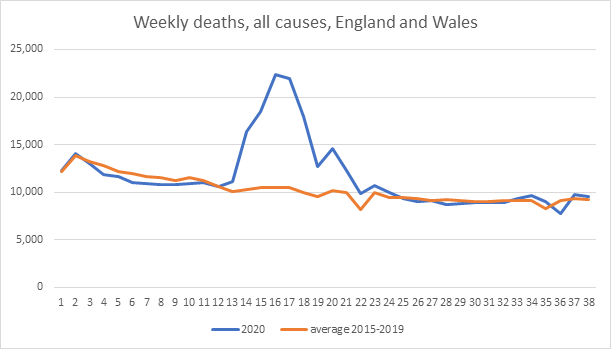 The first UK cases where coronavirus was mentioned on the death certificate occurred in Week 11 (ending Friday, 13th March). This week’s data (as usual, a fortnight in arrears) bring us up to Week 38 (18 September).

In total, the excess of deaths from all causes over the previous 5-year average for the same period is 53,663 so far. Deaths where Covid-19 was referenced total 52,056 so apparently it was a factor (not the only one, but surely contributory) in 97% of the bulge. Maybe doctors don’t deliberately misdiagnose causes of death, after all.

Minimisers compare the scale of CV-19 deaths with the big killers: ischaemic heart disease, cancer and dementia/Alzheimer’s; but these are already included in the orange line above.  A different yardstick might be UK civilian deaths in World War Two: 70,000 over six years then, versus 52,000 in only six months now, with indications of a second wave starting across Europe - cases rather than deaths, but we’ll soon see whether there is a significant uptick in mortality. Like influenza, with which it has similarities, Covid-19 may spread more easily in cooler, damper weather.

Can we agree that a) Covid is real, b) it is more contagious than flu and c) it is more lethal than flu? We are under attack, from germs rather than Germans this time. What are our options?

2. Lock down and close off the whole country

3. Work out a packet of measures to save lives while sustaining the economy as best we can

1. Some point to Sweden as an exemplar of splendid inaction, but they are comparing apples and oranges. Sweden has a population density of 59/square mile as opposed to the UK’s 725; and (I suggest) the cool Swedes are more cleanly, less back-slappy and not so rebellious against their authorities’ detailed guidelines (yes, they have them) even though they hide their heads in the sand on other issues: in Malmö, for example, I would be more worried about stray bullets.

Here in Britain, what would have been the result of standing back and letting the disease rip? We are developing an understanding of who is more vulnerable, and it’s not good news that 28.7% of us are clinically obese, and nearly 4 million are diabetic; as regards the age factor, we have some 1.8 million people aged 85 and over. Just how ruthless are we prepared to be – shall we simply cull the old, fat and sick? Maybe Monty Python was prescient (clip Bloggerbanned but use link!):

2. We can’t copy Tonga, either. Tonga declared a state of emergency on March 20th that will last until at least March next year; inbound international flights are banned to foreigners, and thousands of Tongans have been stranded abroad since the declaration, with the first repatriations starting only in August, from New Zealand. Consequently, to date, there have been no coronavirus cases in Tonga; this is a very good thing, since 69% of Tongans are obese and 18% diabetic  – letting in the virus could lead to a lethal scouring like the flu-related ones we have long accepted (or ignored) in our British ‘care’ homes.

Inevitably, the lockout has a financial implication, but (e.g.) the money Pacific Islanders send home annually from seasonal work in Australia (A$8,000 each – around three years’ worth of on-island earnings) helps keep the pot boiling. As an aside, we need to look at the bigger picture of global relations: the Chinese are lending money around the world (Tonga asked them for debt restructuring in July) and the West should think about increasing foreign aid to Pacific nations in terms of enlightened self-interest.

However, the UK simply cannot follow Tonga’s suit: we are an open, trading nation that imports half our food. The virus has found out our economic vulnerability and, to quote Chinua Achebe in a different context, it ‘has put a knife on the things that held us together and we have fallen apart.’ It’s going to cost us to keep going.

3. That leaves us with compromise. We chafe against restrictions and what some characterise as the curtailment of civil liberties – but that wouldn’t be the first time. Consider the Emergency Powers (Defence) Act 1939 that was rushed through Parliament (and subsequently renewed and extended, to consistent protests by Robert Boothby at the Commons’ ‘apathy’), and the 1940 invention of a new crime of ‘treachery’ to make it easier for us to shoot enemy agents.

The current emergency has highlighted once again the need to address the huge, arbitrary power of the office of the Prime Minister and the Privy Council (did Blair teach us nothing?) – otherwise all that Dunning’s 1780 motion to curtail the power of King George has achieved is to move tyranny down one step to the Executive, as Lord Cormack has recently observed.

There is certainly scope for revising our strategies; and especially the means by which they are enforced, as our editor (at The Conservative Woman) personally witnessed a few days ago in the bully-boy tactics of the police against middle-class softies. It’s not just the Germans who go crazy when given a uniform and powers – remember the special needs teacher Blair Peach’s death at the hands of the SPG? We don’t do fascism half as efficiently as our Continental cousins used to; we British are more amenable to being led than ordered about; we need persuasive leadership, and a vigilant and loyal Opposition; a Parliament, in fact.

For Something Happened, and may well happen again, and Something Must Be Done, but wisely, and with every effort to gain our voluntary support.

In Sweden, they do not even give oxygen to older COVID patients. This is what used to be called eugenics.

The Swedes used to be big on that, didn't they? Didn't know what you just said.