It is not enough to believe; you must eliminate the unbeliever. Nigel Farage’s defenestration from LBC shows how the tide of totalitarianism is flooding in ‘through creeks and inlets.’ His sin was to obey the Catchphrase maxim ‘say what you see.’

See this from the Wail, for example... 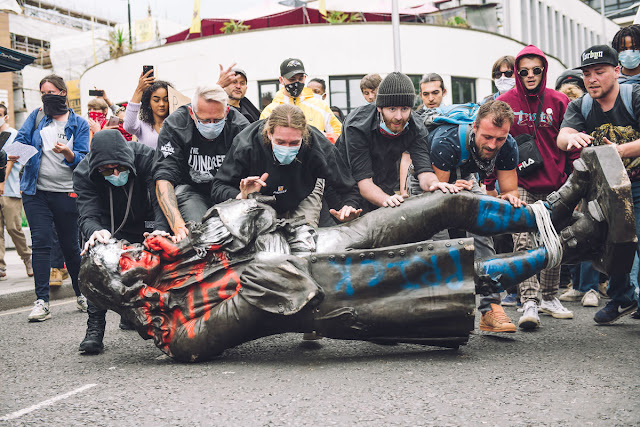 … but please don’t notice the ethnicity of the five hands-on destructors (and almost everyone else there), even though it’s much the same as the suspiciously well-prepared Umbrella Man’s. Otherwise you might think there’s a deeper agenda at work.

In the photo above, a 125-year-old statue of a man dead 300 years is rolling on its way to Bristol harbour. It was made and erected not because of his connection with slavery, but to commemorate his benefactions to the city, worth c. £15 million in today’s terms.  How embarrassing it must be to find that even villains may have their good points.

That leads us to the next stage in the process: destroying records and symbols. Our mother remembered going into her East Prussian school’s library one day after the National Socialists had taken over, and seeing gaps in the shelves where all the Jewish and socialist writers had been.

It’s an ancient strategy. At the back of every believer’s mind is the awareness that there may be an alternative belief, or none at all; this is so threatening that all such evidence must be erased. Look in Deuteronomy12: 2-3, after the conquest of Canaan:

2 Destroy completely all the places on the high mountains, on the hills and under every spreading tree, where the nations you are dispossessing worship their gods. 3 Break down their altars, smash their sacred stones and burn their Asherah poles in the fire; cut down the idols of their gods and wipe out their names from those places.

Much later, but before the founder of Islam had even been born, two giant statues of Buddha were being constructed in Afghanistan; the Taliban (Islam’s equivalent of our seventeenth-century Puritans) blew them up in 2001. All that’s left of them is the holograms set up five years ago; perhaps something like that is the coming fate of Western liberal civilisation.

Now there is a distinction to be drawn between the statue-smashing in the UK and the USA. Many set up in the States were, so my American brother tells me, deliberate provocations by segregationists who hated the advancement of black civil rights. He refers me to James Loewen’s 1999 book ‘Lies Across America.’ I’m not surprised, then, that so many call for such monuments to be pulled down.

Here, though, it’s different: we offshored our slavery and only the profits came home. In my naivety, I long thought that Britain outlawed the trade in 1833 because of the moral force of the abolitionists’ arguments; I didn’t know about the massive financial compensation paid to estate-owners who had until then struggled to waste on architecture, art, drink, whores and gambling the annual fortunes it had brought them. It took the Treasury until 2015 to extinguish the debt for that payoff.

Having said that, what’s taught in schools about the slave trade is myopic. I remember the horror of a nice black girl in a class I was teaching when I explained to her that the slavers didn’t simply hunt down their prey, they bought them from West African chiefs. Even now, not all West African nations have apologized unreservedly for their part in this atrocious business. Also, schoolchildren need to be aware of Thomas Sowell’s startling statistic that

… and that slavery still goes on around the world, on a big scale.

Yet, how fast have the current protests spread! It is almost as though some people have been preparing for revolution for a long time.

They have. I recall from the Seventies a graduate student at Oxford, living from one Social Sciences Research Council grant to another, telling me obvious things about society’s power structures. Another college acquaintance went to work at the Cowley car plant after graduating, to spread the Marxist message to fellow workers on the production line – they beat him up several times, but he persisted and they started to listen, he told me. Some Communists held that political action betrayed a lack of faith in the inevitability of the classless society, so I remember one who contented himself with local good works like a mediaeval limitour, such as fixing plumbing for a poor householder. Later, a trainer on my teaching course in Birmingham made some comment about social change and my not wanting to get my hands ‘dirty’, which even then I interpreted as ‘bloody.’

When it is over, when the Republican Calendar begins and the Cult of Reason is celebrated, the world will be made anew and all the evidence of the old will be annihilated to save us from the danger of relapse. As Orwell’s O’Brien says, ‘It is intolerable to us that an erroneous thought should exist anywhere in the world, however secret and powerless it may be.’ Roll that statue, smash that altar, pull down that sacred pole.

Re: Your Deuteronomy quote

In those days, it was often considered that the statues were embodiments of the Gods themselves, and people like the Hittites and Assyrians often kidnapped them.

Didn't know that, thanks!

As for evil men having their good points, we might note that Hitler made much hunting and all mistreatment of animals a crime, and had the Autobahn system built.

I don't recall statues of him.

People like Pinochet, Peron and Duvalier were also philanthropists.

A grip on real history is therefore imperative ... but how to fnd it?