JULIAN ASSANGE: A Letter to the Home Secretary

I've tried, and you can probably do much better - I hope you do. I see Assange as essentially a political prisoner and think that despite his faults he should be defended - for our sake as well as his.

You can also write to him direct to help his morale - I repeat the guidance for this at the end here.

I write to you in your capacity as Home Secretary and congratulate you on your recent appointment.

As you know, Mr Julian Assange has spent seven years effectively in solitary confinement at the Ecuadorian Embassy and has recently been seized from there and confined in Belmarsh Prison.

You will be very familiar with the details of his case. As you know, there is widespread disquiet about the British Government’s treatment of this journalist whose work has been given the Serena Shim Award “for uncompromised integrity in journalism.” (https://serenashimaward.org/laureates/)

May I most respectfully request that your Department:

My reason for contacting you about this is that I feel that our country’s moral standing in the international world is in danger of being compromised in this case.

Julian Assange is being held in the maximum security Belmarsh Prison and appears to be in ill and declining health. Some people are concerned that he is not receiving adequate medical treatment, is being harmed by continuing long periods of solitary confinement and is allowed insufficient time to meet with his legal advisers and others.

Aside from protests, demonstrations and fund-raising, one way to show support is by writing letters - to your political representative, to the current Home Secretary Priti Patel, and to Julian himself (which MUST be done IN THE RIGHT WAY, as shown below). 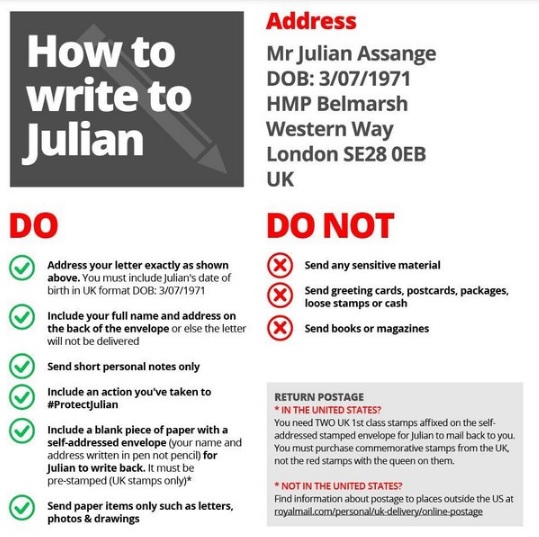