If you stand back and look at the world today and compare with a couple of years ago you could be forgiven if you think the world has gone mad. Never across the globe has so much effort been put into raising issues that not that long ago would have been seen as tittle-tattle and ended as tomorrow's fish and chip wrappings.

It is as if the Brexit result and the nomination of Donald Trump as POTUS has energised the defeated armies of Liberalism into a mad frenzy of retribution by any method: the status quo must remain even when proved to be corrupt and failing.

More than ever before the serried ranks of feminists, activists, LGBT XXXX protesters and endless lost causes have jumped on the protest bandwagon and threatened Armageddon if they are not listened to and their claims, however unjustified, acted upon. All of this we know: it is non-stop in the media in an endless rolling news of of bigged-up tittle-tattle whilst serious matters go by the board, all being defined by these self-appointed arbiters and guardians of public morality.

All of this is now accompanied with its own language: a whole new lexicon of words and phrases are now used to describe what before was illustrated with simple English.

The list grows seemingly daily, it’s almost as though there is a prize in the junior subs office (if they still exist !) for the latest non-word or bastardised phrase. Where did it all start? Your guess is as good as mine, but the many phobias certainly were an early portent of things to come: "phobia" or "phobic" being attached to ever more groups and individuals without any real justification. It is labelling, compartmentalising of all and sundry so they can be labelled with a phobia. Of course, once handed the tag all instantly become nasty people by default.

Phrases like "safe space", "triggered", "micro-aggression" are darlings of the University campus. We have become inured to these words because they are used out of context so much. The most ridiculous is "cultural appropriation": does anyone think before using that phrase? It doesn’t seem so, being the most out of context of all the isms, ons etc.

Having said that, “white privilege” runs it close, the inference being all white people should be subservient for the perceived sins of their forebears and colonialism - as if white people are the only ones ever to vanquish and colonise.

Despite the various genders that are now perceived to be around, and the gross overuse of of associated words like "transgender" and the myriad of others that would have you believe that every other person was of a gender other than male or female, the number of these exceptions to the general rule is minute in the scheme of things. Reading and viewing the press and the way political parties cave to minorities, you would be forgiven if you thought otherwise. A good example of the nonsense of it all is the use of the word "queer", totally non PC as a description up until a year ago, but now perfectly respectable.

Currently it has ramped up to the level of threatening language and would be funny if it were not being bandied about by people who should know better. "Nazi" is used so much it has become meaningless, yet the label sticks in some cases, and the same applies to "hate crime" being used by authorities in a total overkill of language over substance. The recent shooting in Texas was described by a police officer as a "hate crime"; two years ago it would have had the correct label of "mass murder". The phrase "hate crime" almost gives the perpetrator an excuse for his crime - hate caused by… as if we should understand him and equate him with those (sicker) people who have said nasty things on the web. In the eyes of the users of the "hate crime" label there is no real difference, hate being the equaliser .

This is all not only wrong but is lazy or deliberately antagonistic. The MSM have a lot to answer for in this area, cloning the words of those groups and their Common Purpose overlords. Will it run its course and simply fade away to be replaced with another form of derogatory language? There is no sign of a slow down but things do change and the sooner the better as far as I am concerned. Oh, and I’m offended by it all and that probably makes me a racist - or does it? 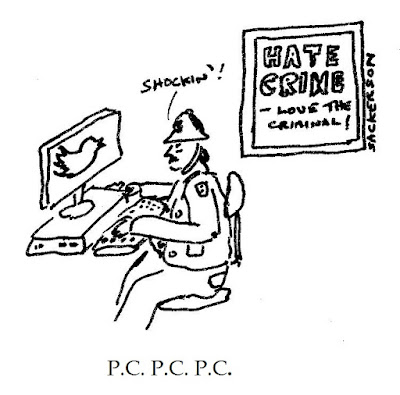 Good article, I liked it.

The thing that bothers me, if a world war started, it would probably end up on page two of the newspaper.

It kind of looks like whatever you did to your date while in a movie theater in your youth, can come back to Taunt you as sexual perversion 50 years later.