Wine: a Tale of Change and Fashion, by Wiggia 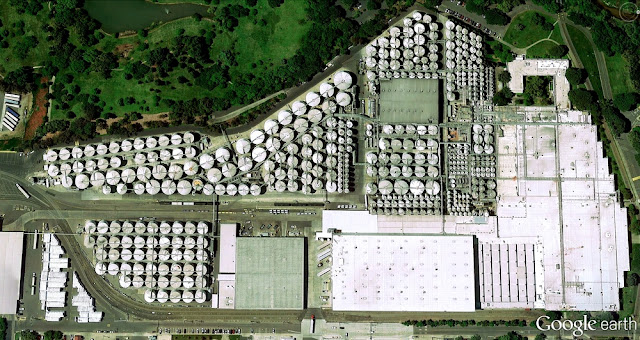 Those of you who believe that wine is a product made by artisans who tend the grapes' every need and sit in the vineyards during the winter talking to the vines and then with love ferment and mature the wine in oak casks before bottling and hand labelling, should look at the above picture.

That is the manufacturing plant of E&J Gallo in Fresno, California, the world's biggest winery! No, it is not an oil refinery.

Wine has been evolving and changing since it was first made - in ancient Greece?*

The acceleration of change in the last twenty or thirty years has been of a different magnitude on all levels. The science employed in the making of wine has matched the new knowledge employed by the winemakers and their ability to overcome indifferent sites and soil as well as temperature changes, and to enhance even further the already good sites.

On top of this the proliferation of countries manufacturing wine, yes it is an industry, now cover ever more areas of the globe. Not only are old forgotten areas being revived but new ones are emerging. All this should bring joy to a wine lover's heart, yet there are caveats.

The fashion in wine styles and the promotion of the next big thing grape-wise has meant in many cases whole areas being ploughed up and replanted to serve that fad. As wine is not produced overnight, and the vines take several years before becoming productive, you are taking a big chance jumping ship for another, and if you don’t move you could be stuck with an oversupply of the wrong wine.

Nowhere is fashion in wine and its downsides more clearly emphasized than in Jerez. The bulk sherry market has collapsed and grape growers are grubbing up vines and planting more profitable crops. Sherry has been struggling for years as has port, even aggressive advertising and assurances it is on the “up” have failed to stop the slide. The only good thing about all this at the moment is that high quality sherries and even vintage port have never been cheaper for those left still drinking them; even in Madeira much of the land growing vines has been lost as the demand dropped. All this is part of a cyclical pattern of drinking tastes and fashion.

None of this applies to those perennial top end regions such as Bordeaux or Burgundy, where demand at this moment in time exceeds supply and the prices correspond with that shortage.

What prompted this piece was an article written for the NYT by Bianca Bosker, a sommelier who in the piece debunks the snobbery against bulk wines and the fads in other areas like the current trendy “natural” wines - along with "bio dynamic" and "organic", these are the buzz words in the wine trade at the moment. "Organic" in its reference to wine is interesting as these days most wines outside of big brands are as near organic as you can get anyway, so no big deal with that on the label; "bio dynamic" is the picking and planting according to the position of stars or moon or something and while quite a few top class wines now claim to be bio dynamic would you really know and could you tell the difference? I think not; and "natural": well, if you plant, cultivate, pick and process the grape, that part is pretty natural by definition.The link to Bianca Bosker's piece is here, it’s a good read, if slightly indulgent:

Producing wine is at its most basic agriculture, it’s an agricultural product and all agriculture is governed by the same rules as to site, soil and climate. Even the technical side has infiltrated into growing the humble spud. It is only when the wine maker puts his own stamp and expertise into the product that the differences emerge and for that you need good fruit and a lot of faith.

But this is about the fads and fancies of everyday drinking. Few can afford cru class wines for daily consumption if at all; most will remain financially out of reach whatever our status in life. No, this is about that go-to bottle on the supermarket shelf, the one that may have been transported here in a boat and a giant plastic bag for reasons of finance, as it is cheaper to bottle here than transport in bottle with the added weight - read the link for all the technical “food” expertise that is now put into wine, quite legally. For the big brands, it is no different from being hi jacked in the street to say which is your favourite burger from a choice of six: the favourite goes on the market. There is absolutely no point in the big brands putting out a wine designed by experts and loved by experts if the public doesn’t love it. It is food sampling for the masses.

What the “expert” says about this is usually derogatory and sometimes they are right, but they miss the point: these wines are for the masses, us, and there is absolutely nothing wrong in that.

The problem with that approach is that eventually, as with buying a car, so much research has gone into supplying the “right” product that a uniformity starts to emerge, and where this has become more noticeable than anywhere else, probably, is with Australian wines that are available here. Australia almost single-handedly dragged the everyday wine out of the plonk era and replaced that awful French,  Spanish and Italian bottom end rubbish with a reliable drinkable product, and for that alone we should be eternally grateful.

In my view the problem that Australia now has, having grabbed a large chunk of the world's wine market and especially supermarket wines, is lack of variety, not just in grapes but in what you drink from the bottle. Their industry has been built on the great god Shiraz, 27% of the wine land is planted with the grape, and very well built too, but it is these very wines that now fail to inspire as they universally conspire to be user-friendly and to a large degree, as with so many of the big brands, they are  indistinguishable from one another other than on price. You have to pay an awful lot more now if you want something better. Yes, they do grow Cabernet and other grapes, but Shiraz is what they built their reputation on and that is what the public remember and expect from them. It is changing, but slowly.

The same with New Zealand: having conquered the Sauvignon Blanc world and now attempting to do the same with Pinot Noir they have little to fall back on as other countries muscle in on their patch and some very successfully. So far sales are holding up, yet for how long? as South Africa starts to up its game with other wines besides Chenin Blanc and is making a very good job of it. South America is really making an impact, with Chile’s big wineries making inroads into the bulk market; and Argentina is very well placed, having sold well in the USA with Malbec and now doing the same here and having many fine smaller wineries; and even at this relatively early stage in its wine evolution, Chile is diversifying in the planting of grape varieties. All this of course bodes well for the consumer in the long run, if you are interested in wine; if you are not, it makes no difference.

You will not be pouring your purchase down the sink in disgust as so much was years ago, or you shouldn’t be, so much has the quality of production changed, and as you open another bottle of Wolf Blass Cabernet you will enjoy it as you did the last time. After all, as a "yoof" I consumed indecent amounts of Watney's Red Barrel; that seemed perfectly OK at the time for getting blotto on, no need for a hand-crafted micro brewery beer for that purpose.

In some ways the fashion in wine is interesting. Who could predict the fall from grace in the mass market of Chardonnay, the great white grape of Burgundy? Who could have foreseen the emergence of Pinot Grigio?

And why, when Sauvignon Blanc offered a still better alternative at the same price, why the rise of rosé, when if you were blind you would never know you were drinking one? The colour, almost certainly - another success for fashion and the world of marketing, and as in other arenas such as fashion clothing itself there is nothing wrong with that. In today's world, somebody who has never purchased a bottle of wine in their life can now pick up at a decent price something they will probably enjoy and then return for another. Those wines of old would have had the opposite effect.

The majority of those buyers will never venture far from their chosen bottle. Does it matter? Not a jot, as long as they are happy; and the big brands intend to keep them happy. What I think is irrelevant, and when at your next "barby" the host pours you a fifth or six glass of the red he insists has a slightly mineral taste on the tongue and there is just a hint of herby medicinal after-taste, you can smile and just be thankful it is drinkable and you don’t really care if it was fermented in an upside down yurt. It really doesn’t matter.

Guilty as proven, the stuff was everywhere in that period and it was downed when no alternative was available, fortunately it had a relatively short life and I grew up.

I can go you one better. My first week at university was spent drinking Watney's Starlight.