Child labour in the Potteries 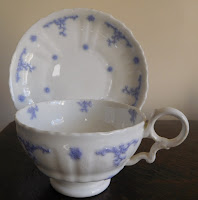 Sometimes even old cups and saucers have a slice of social history to relate. The above cup and saucer dates from round about 1840 and although unmarked is typical of wares made by the Hilditch and Hopwood pottery at Longton. It was made in part by child labour.

In Scriven's Report on Child Labour in the pottery industry in 1840, Richard Moreton – then aged 9 and working at Hilditch and Hopwood reported.

‘I am a figure maker for William Moreton [Richard’s father], I work by the piece and can make 40 dozen (480) small figures a day: I get 1d for ten dozen, that is about two shillings [10 pence] a week.’

So little Richard Moreton did not work for Hilditch and Hopwood, but for his father William who subcontracted figure making to his 9 year old son.

The 'figures' little Richard made in such vast quantities may have been something like the lilac coloured sprig mouldings on the above cup and saucer. The sprig mouldings were made from soft coloured clay rather like Plasticine. Richard would press them out of the clay using moulds, carefully remove them, then either he or someone else would stick them to the cup or saucer with liquid clay before firing.

These are not high class items of bone china; they were intended for middle class markets to be brought out the china cabinet for genteel afternoon tea parties.

13) The processes being such as to admit of the employment of whole families father, mother, and some two, three, or more children - their united earnings are sometimes £3. or £4. per week: but, proverbially improvident, and adopting the adage,- "sufficient unto the day is the evil thereof", they squander the proceeds of their labour in gaudy dress, or at the skittle-ground and ale-house; so that, when overtaken by illness or other casualty, and thrown for a few days out of work, they resort to their masters for a loan, or to the parish workhouse for relief.

Not quite sure of the point AKH is making and the second quote from the Scrivens Report sounds very puritanical - how dare they enjoy themselves in ale houses!

Following the Acts of Enclosure people were driven from the land and ended up in towns and cities just in time for the beginning of the industrial revolution. Daniel Defoe in his "Tour through the whole island of Great Britain" just prior to the aforementioned Enclosure Acts found that villlage and rural life was much more dynamic and prosperous than we now think. Cobbet's or Laurie Lee's idyllic and languid country life is a myth. So Richard Moreton and his father were just getting on with life as they had always done but in much less pleasant circumstances; living in unhealthy cities instead of healthy villages.

Child labour was a normal feature of life.My grandfather started work down a coal mine at the age of fourteen as did this gentleman-

(fascinating book, more of which later)

I was working at the age of nine also but only during school holidays and it wasn't 'real' paid work, it was part of my education. I was a capable bricklayer by the time I was about 13 or 14. You can learn more outside the classroom than inside. Stuffing children's heads with 'facts' is not education. The etymology of education is usually given as being derived from the Latin 'educare' meaning to draw out, to bring forth although that is disputed. Socrates compared education to midwifery - the mother gives birth, the midwife helps: the pupil is in similar fashion helped and guided by a teacher. Oops, I had better stop before I go off on another rant :)

Back to that book "No Regrets" William Muckle was born in 1900 in Cramlington in Northumberland and he wrote the book in 1980, it comprises his own written description of his life with additions from two interviews with the publisher. Muckle was one of those imprisoned for his part in the derailmant of The Flying Scotsman during the 1926 General Strike. Excellent book and, from what I remember of my grandfather, a true reflection of what was a very hard life.

,,, Having looked at the comments at AKH's place it seems I am not alone in thinking that schools are not the best places to learn everything. After all, you cannot learn to ride a bike by reading a book about it.

There is a book by James Elkins called "Why Art Cannot Be Taught." His conclusion in the book was that it is next to impossible to teach anyone anything!

JD - there is no particular point being made, it is a vignette of the industrial revolution which inevitably throws up many possible conjectures.

It isn't possible to tell how Richard Moreton lived, but as he and his father were producing decorative middle class wares, his family may have lived comparatively comfortable lives. However, Arnold Bennett described Longton as akin to Hell so possibly Richard's was not a happy life.

The teaching issue is interesting and worth pursuing because Richard would have learned far more about real life than the average nine year old today.