Why fracking - and other energy alternatives - won't save us completely

The discovery of large reserves of shale oil and gas has raised hopes that our economies may be rescued by a new energy bonanza. But this is not a rerun of the 1970s North Sea Oil boom that gave the UK economic relief for decades afterwards.

Attention is focused on the quantities of reserves, but the missing factor in the analysis is what it costs to exploit the energy source. What we should be looking at is "net energy profit", also known as the "energy profit ratio" or "energy return on investment (EROI)". The "profit" is accounted for not in dollars but in energy - what is put in, versus what is made available to the end user.

The table below is taken from an August 2010 article by Roger Blanchard of Lake Superior State University. It shows that the energy profit from shale oil is a mere 10% of what was obtainable from 1970s conventional oilfield production.

Other energy sources are even worse. For example, corn ethanol barely covers its energy costs and is controversial because it harms the poor: a May 2012 study concludes that the price of corn has tripled in Mexico because of this additional demand and associated financial speculation.
Wikipedia offers this EROI comparison of energy sources: 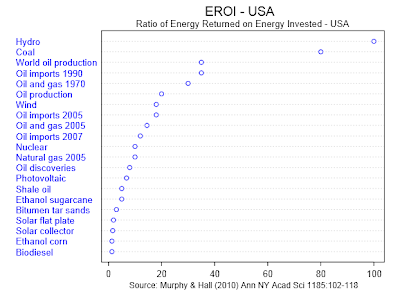 Corn ethanol is even worse than solar, and that's saying something.
Of the renewables, wind turbines look promising, though they are also stigmatised by some as noisy, unsightly bird-chopping machines. And the estimated EROI on them varies startlingly, according to this graph from a 2007 article in "Encyclopedia of the Earth" (updated 2011): 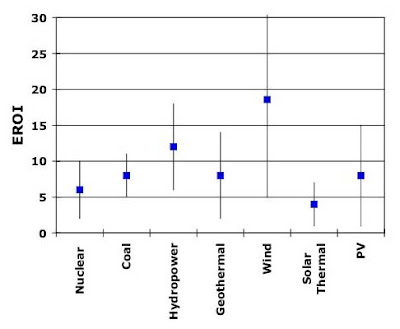 Accounting for every scrap of energy in the process - from the production of equipment to its ultimate decommissioning - must be hideously complex, leaving the debate open to skewing by a variety of competing commercial interests and pressure groups (including, no doubt, the publishers of the above).
But accounting in financial terms is also biased by subsidies and permissions granted at the whim of governments swayed by industry lobbyists or trying to earn political credit with environmentally-minded voters. Money has already lost one of its three functions - as a store of value - and thanks to official interference in its quantity and distribution, is now rapidly losing another - its value as a unit of account, to inform decisions. Otherwise we would be unlikely to see so many British homes festooned with solar panels - an enthusiasm that has waned dramatically since the subsidy was cut this year.
Renewables will only go a small way towards replacing fossil and nuclear fuels, and shale fuels cannot promise "business as usual" in the meantime. Energy is not going to run out soon, but it will become more expensive, and our focus in the next few decades should be on restructuring the way we live.  We didn't do that when North Sea oil was gushing. Shale is pricey and will be attended by inconvenience and controversy, but it may be our last chance to adapt without even more catastrophic disruption to normal life.
Nothing here should be taken as personal advice, financial or otherwise. No liability is accepted for third-party content, whether incorporated in or linked to this blog; or for unintentional error and inaccuracy. The blog author may have, or intend to change, a personal position in any stock or other kind of investment mentioned.

There's no figures for shale gas though is there? Shale oil is a small incidental part of fracking - the main target is gas.

Thanks for that, Jim, I'll have a look. Still means we have to start rejigging the way we do things in the long term.