Reading Richard Murphy's Tax Research website, I see that Paul Krugman has graphed UK public debt since 1900 and really, it's implied, we're not in that bad a situation right now.

But you have to look at the total weight of debt in the economy, not just the government part. McKinsey did this in January and as of Q2 last year, the UK's total debt-to-GDP exceeded 500%, putting us pretty much on a par with Japan and far above eight other major economies: 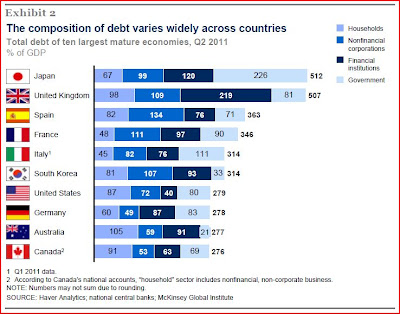 And we don't have an industrial - and industrious - base like Japan's.

How Japan has fallen.

Yes, the total UK debt is high. But government debt is really quite low according to the chart. So this does belie the line that government debt is too high. This is the point that Richard Murphy is making. He was not commenting on total indebtedness within the UK as there is very little governments can do about that.

I think governments could have done far more to restrict the growth of private debts, but I agree that we've managed with higher public debt before, and in fact it would help to transfer more private debt to public as the State tends to pay lower rates of interest, so there would be something of a stimulus to (or less of a brake on) the economy.

I agree very much with your point about the role of governments in relation to household debt. In the 1980s the then Thatcher government positively encouraged households to borrow. Financial regulation was liberalised to permit this to happen. Had households not been able to borrow at these new levels then living standards would have fallen because of the disappearance of jobs. The Blair/Brown axis continued with this light touch regulation. This is why household debt in the UK is now so high.

So you are right - it is government failure that has produced the dreadful state the UK is in, but it is wrong for the commentariat to say that public debt is excessive or is the cause of UK economic failure.

The right-wing commentariat argue like old Communists - they have a doctrine, not a theory. My brother tells me that a major problem in USA politics is that the desire for the rich to be less regulated and taxed is supported by people who mistakenly identify with them.

Professor Steve Keen, who predicted the economic meltdown, says that it is the total debt to GDP ratio that determines whether an economy is in trouble. Looking at the graph it is clear that Japan and UK, by Professor Kean's criterion, are the worst. Japan has been in the doldrums for the last 20 years. The UK, according to Professor Kean will undergo a second credit crunch because of its large scale indebtedness. Professor Keen also points out that it is not the UK's public debt that is the problem - it is the total debt compared to GDP that is the problem. In fact Professor Kean suggests that public debt could be increased and the proceeds be given to private households on condition that they pay down their indebtedness. Those households without debt will spend their windfall and this should stimulate the economy. The overall effect of this policy would be to reduce the UK's total debt to GDP ratio (presumably because the bank's indebtedness would also fall as a consequence, although I am not clear as to the mechanism)

Well done, Sanderson, for pointing out in your blog post that it is the total debt that matters and for posting this very useful graph.

For those interested, Professor Steve Keen's lecture can be heard via IPlayer on Radio 4

Here is the link to Professor Kean's lecture:

Thank you for your comments. Sadly, there's a big difference between what should happen and what is likely to happen. Keen's ideas are too radical for our amateur politicians, who are in any case over-impressed by their banking friends.