The uselessness of gold

An article by Elliot Turner last week ("Why I Sold My Gold") echoes what I've been saying for a while:

No one knows what will happen in the event of chaos, but to me the only real answer would be to buy a cave stocked with canned goods. Forget about gold, as that would do nothing in a state of anarchy. Gold ultimately relies on the same psychological comfort that fiat currencies do in universal acceptance, and therein lies the gold as currency paradox.

I'd suggest that gold is not a protection against disaster per se, but a speculation during moderate troubles, and a store of wealth for a future time after disaster, when recovery has happened. But as with the Staffordshire Hoard, that latter time may be a long, long while later and you may not be there to benefit.

So I propose a new currency valid in good and bad times: 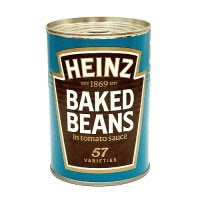 "Ah," you may say, "but this currency is perishable." So was the scrip issued in Wörgl in 1932-33; in fact, a negative interest rate was built into the scheme to encourage circulation instead of hoarding during a deflation. It worked wonderfully - so well that it displeased the local socialist party and the central bank.

Which leads me to think that the true measure of a currency's virtue, as of a man's, is not its supporters but its enemies.

The Heinz will also be superior to the current pound (= 100 pence) in terms of giving change, as was the old British pound. The latter was worth 240 pence, each penny legally exchangeable (until the end of 1960) for 4 farthings, thus £1 = 960 farthings.

You can get two 400g cans of Heinz beans today for less than £1, and each tin contains over 400 beans. So the modern pound must buy you c. 960 individual baked beans. I therefore propose to call a single baked bean a "farting".

I can see a premium developing for the ring pull top ones.