I suggested on Wednesday that the market may already have lost much of its bubble, considered in real terms, and here below is my simple attempt at chartism.

What I've done is to draw two purple lines, one connecting the lows in the mid-80s/early 90s, and the other the highs in the same period. I've chosen that time-frame because it's before the silliness of the late 90s, and it does also include a period when the UK economy was in the doldrums. 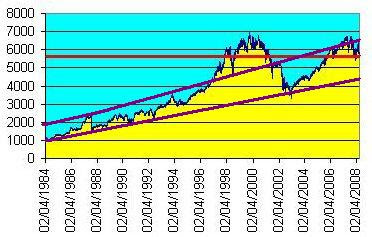 Using these parameters, the late 90s and early 00s were well above trend, whereas last year's highs only just peeped above the upper line and the current value is hovering a little above the centre of the hi-lo wedge.

Taking the market at close yesterday and extrapolating to that 5,850 midpoint, would imply a future return (ignoring dividends) over the next 16 months, of c. 2.5% p.a. - not nearly as good as cash, especially in an ISA. On the same assumptions, to achieve an ex-dividend return of 6% p.a. would require entry into the market at c. 5,400.

On this tentative line of reasoning, we should be looking for a re-entry opportunity somewhere in the 4,500 - 5,400 level, say 5,000. Shall we wait for the next shoe to drop?

A synopsis I can agree with based on the facts however I think panic may set in at any moment. There is a lot of fear "on the street".

... and an even better buying opportunity for those with serious cash, I guess.

hmmm...the FTSE has changed so much though. All those mining stocks - so much depends on the so called super cycle. I don't know the answer myself - but a crash there and everything will drop a couple of thousand points in no time.

I was reading that there was going to be a period of 'phony' improvement in futures and the like before the big crash. Cash for me.

Boy, CU, you're even more bearish than I am!

... and James, yes, I'm expecting worse before better. I think we're looking for the point of maximum pessimism. But as I said before, we need to remember how much has been lost already vs inflation.

I'd be interested to know how much real (non-borrowed) cash is sloshing around, and who's got it. Because when the real rally comes, it could soar fast. I'm not expecting it soon, but there will be a point.

We spend so much time looking at stocks, but I think it would be interesting to look at the story of cash reserves and personal cash savings over the last 50 years.