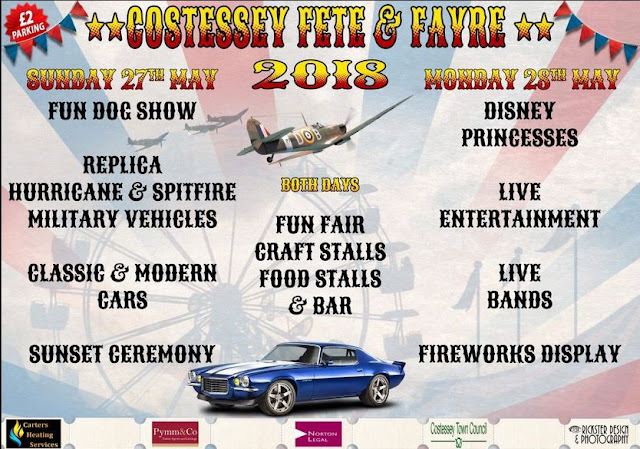 We have an annual two-day fete and fair next door to us, really next door, every year. Today (Monday) is the last day and we get a firework display at ten o’clock to finish. The itinerary can be seen here….

The last couple of years have not been kind to this event, the weather spoiling (or worse) either one or both days, but this year a downpour was at the first day's end and so far today it has been sun all the way despite a “yellow” warning from the Met Office.

For various reasons and despite the proximity I have never been, though the firework display is as near in my back garden as you could wish and that has been enjoyed from the comfort of an upstairs window. But today we went, hardly an effort as we have a side door to the footpath that leads to the recreation ground and it is just 25 yards and we are in.

Today was different to Sunday: no WW1 trench experience for us - how they manage that I have no idea - no dog show and no classic cars; more of a kids' day I would imagine.

After a few minutes I wished I had brought my camera, so many were the photo opportunities, but with the ‘English’ moral Police seeing everyone with a camera as a paedo it was probably better I had no camera, even though we are the only country in Europe where this attitude abounds.

We passed through the side gate and almost straight away the first attraction was spied: the donkey ride. Six of the little fellas were working in shifts taking small children in hard hats round the showground for £2 a go. The queue for this was at least twenty long and obviously popular with the junior clientele, especially young girls - nothing changes in the equine world..

The rest was laid out in four avenues and the fair was at the entrance end; not a full blown fair as we had in our day but most of the essentials were there, though no “Big Bertha” or Helter Skelter, but most of the other rides were there including the Dodgems. Now the Dodgems always evoked a smell of burnt electricity in my day as the power was transmitted from an electric ceiling to the car by way of a pole that touched the ceiling, rather in the style of a trolley bus, and the Dodgems were a macho affair with riding on the back until chased off by the operators was de rigeur; this was a very family friendly sanitised Dodgem but still very popular as were all the rides with queues for tickets.

The obvious difference in the fair compared with the ones in my youth, which was the last time I went to a fair, was the new must-have item: the bouncy castle. Here we had a whole range of bouncy castles that had provision inside for war councils, slides for quick exits, stairs so fun jumps could be repeated, castles shaped like giant cars, one with windows shaped like a giant tea pot and assorted others.

There was also a sort of bungee “experience” like a swing on elastic. A small girl on a limited bounce was asked if she was okay, the small screwed up face nodded yes and wanted a bigger bounce; she could not have been more than eighteen months to two years old.The bouncy castle has found a niche with the very young no other entertainment can provide it seems, all of them were in full use with queues waiting, for the very young there were under sixes only castles. I was tempted !

A small pop concert venue for “budding” stars of tomorrow, and in the centre itself junior "how to pot plants" was proving popular, dirty little hands always goes down well.

Elsewhere there was the now obligatory face painting, hair plaiting, sparkly face decoration and a stall selling party princess tutus for the those youngsters who now seem to wear them as everyday attire.

If there was one thing that has changed over the years it was the supply of refreshments, aside from the beer tent and a fruit drinks and cocktails bar ! There were roughly twenty stalls supplying food from the humble and not so humble burger through fish and chips, hog roast (long queue and wait for that one), ice cream van with a queue into the distance on this hot day, two miniature cafes, homemade cakes, fudge, chocolates and everything in between. It appeared that everyone was eating or drinking, gluttony has no bounds on days like this, and yes, guilty! as I purchased a very nice cake with the excuse it was for my tea, though it was far too big for just tea ! With all this food I failed till later to notice one striking omission: no candy floss. No fair is really complete without it, I shall have a word with the organisers so as to rectify this oversight.

Any other obvious differences since those early days? Well yes, the people at the fair: it was the usual mix of what seemed a pretty good cross section of Britain today, in this area anyway, almost exclusively white, which no doubt those in power will do their best to revise in short time, but a good cross section none the less. So what was different? The most striking thing was that in my day the fair would be for teenagers, mods rockers and everyone else would make up a large segment of the fair goers; not so much now if this one was anything to go by, the place was full of the little darlings - I can only think the lure of the bouncy council has worked its magic not exclusively but to a very large degree.

In other areas the strange and the weird show up as they always do, some very odd-shaped people in misfitting clothes, more in clothes of poor taste, we had a lot of very bad tattoos on display in the sun (golden opportunity to show those off in the hot weather), several mobility scooters holding a union meeting in the shade of trees, alongside the picnickers.

Was it a success? Certainly! The raucous calls from the showmen, "Do you want faster and noisier?" were answered with a very loud yes and the delight of it all on the young children's faces was there to see.

Despite all that is going wrong in our country, it was all forgotten on the showground; not a uniquely British event by any means but still going strong and still giving a lot of pleasure to a lot of people.

Oh, the rain never appeared and the firework display that I wanted to photograph went ahead but as the wife prodded me at ten - the time the display started after I had fallen asleep on the sofa - my rushed attempts to capture the display were disappointing, I blame the wife: she deliberately let me snooze on, spoilsport. 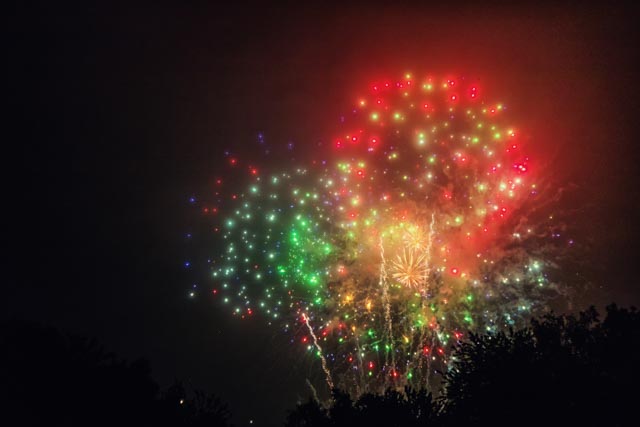