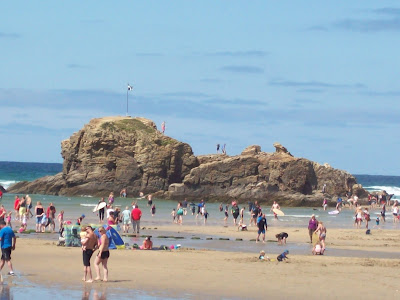 Perranporth, between St Agnes and Newquay on the north coast, is named after St Piran, one of the patron saints of Cornwall. He is said to have been flung by pagan Irish into the sea with a millstone around his neck, but miraculously floated. I have read a more secular explanation, which is that he came over in a light boat - a coracle? - and the millstone was placed in the bottom as ballast to provide stability in the choppy seas. What mystifies me more is why numbers of missionaries came over from Ireland in the Dark Ages, and why they waited until the Romans had left, when Rome's official religion had been Christian for well over a century. Perhaps King Arthur invited them.

The flag of St Piran - a white cross on a black background, sported by so many tourists' cars, is said by some to represent the melting of white tin out of a black stone in Piran's hearth. Again, I think we underestimate the ancients. I don't believe glass was accidentally discovered by Phoenicians lighting a beach fire, either. If our forefathers had been dumb but lucky then at some point they would have run out of luck and we wouldn't be here. Even the invention of bread remains something of a mystery, when you consider how many processes are required to turn wheat into something edible. I believe there were proto-scientists and technologists much longer ago than we flatter ourselves to think. 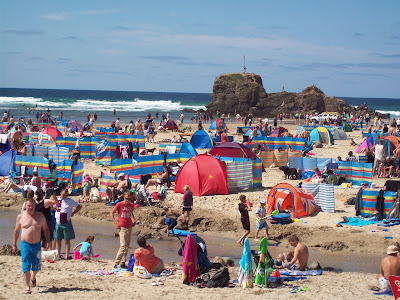 It was a beautiful morning when we arrived, and the beach was packed. What with striped windbreaks and mini-tents, the British seaside looks like a cheerful refugee encampment these days.

Parking is tight and a bit expensive on the seafront, but if you turn off a little way uphill, into Wheal Leisure Car Park, you may be lucky. There's loos there and a pedestrian shortcut down to the shops.

We had lunch at the Pavilion Boatshed on the beach approach. It has stylish décor and the chef knows how to cook fish.

All original material is copyright of its author. Fair use permitted. Contact via comment. Nothing here should be taken as personal advice, financial or otherwise. No liability is accepted for third-party content, whether incorporated in or linked to this blog; or for unintentional error and inaccuracy.

Ahh ! Many happy hols there, both as a child and a parent. Damming the stream by the rocks under the Ponsmere hotel was always a lot of fun. Some great caves up the beach slightly to the north - few go there, and magic for kids

and some 'interesting' sights at the nearby RAF base of St Mawgan ... (see google earth)

We saw the total eclipse from the cliffs above Perranporth, one of the very few places in England where the clouds parted in time to see the whole spectacle - the shadow rushing across the ocean towards us ... unheimlich, as the Germans say