The privatisation of crime by Failing Grayling 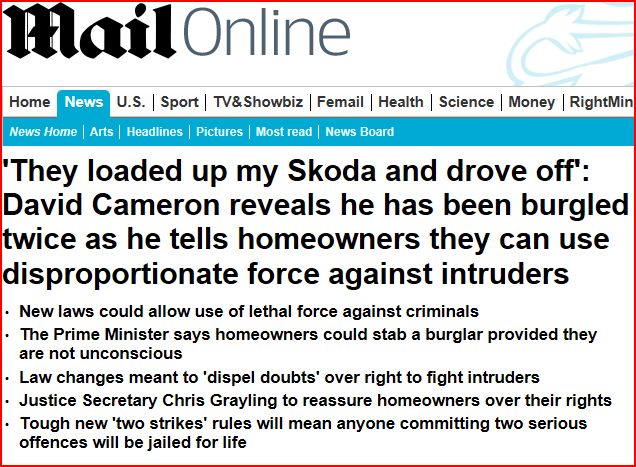 Householders are now encouraged to enter a fantasyland where they confront and subdue intruders and are authorised to use "disproportionate" force.

1. Force that is "disproportionate" is unjust in common law. You are already entitled to use force according to what seems reasonable in the circumstances, which can mean killing someone else. Should you succeed, some might advise (unofficially) that you should then go totally over the top and make a bloody mess of the perpetrator, as evidence that you were panicking and so didn't kill him in cold blood. One shot, jail; the whole magazine plus pistol-butt-smashing the face to a pulp while screaming like a banshee for ten minutes, walk free - maybe. A knife fight - far messier: they often don't die straight away, which is why deceased knife victims often have many, many wounds. You think you're going to win this?

2. You are likely to be asleep when a burglar comes in. What are the chances that you will wake in time to recognise the threat, and that you will be stronger, fitter and quicker than the intruder who is already fully pumped-up to the extent that (typically) after the break-in he raids your fridge and biscuit tin to replenish his adrenalin-haywired blood-sugar level? And what about his Number Two, who unknown to you is behind you as you are dealing with Number One? Possibly also Three and Four, and a lookout? How about when you're ill, or old, or crippled?

3. If self-defence becomes the norm, don't expect the criminal to come in unarmed.

What this is really about, is the failure of the police and the courts. If police patrolled regularly, checking gates and shop doors, you'd be protected. If first-offence burglary was punished by a stiff prison sentence - as it used to be - your property would be protected. If hanging were still a legal punishment, your life (and the lives of your loved ones) would be protected.

If self-defence becomes the norm, don't expect the criminal to come in unarmed.

He does that now. He'll think twice about even coming in now though.