Gold, and theft by inflation 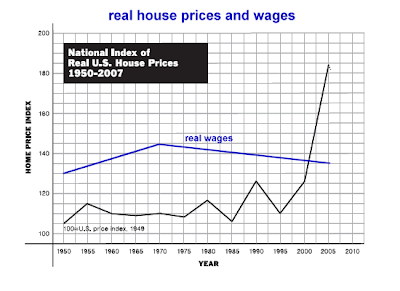 Smith's take is that "the speculative mania in housing was fundamentally a tragic last-gasp effort to make up lost ground via speculation in housing". And if housing reverts to mean, it has a long, long way to go yet.

yes, Nixon is an interesting study in retrospect. He was Their mug.

Nixon had a choice. He could accommodate LBJ's extravagant
Welfare/Warfare State decisions, or put his foot down and try to correct things. If he'd done the latter he probably wouldn't have been re-elected, so he did the former. I blame the electorate.

Nixon had a better reputation in Europe than in the US, since he at least appeared to understand the paranoia of the Russians and Chinese.

My parents bought their final house in 1969, in a lovely neighborhood, for $29,000. They were worried about affording the $126 monthly house payment....

Lots alone, before the crash, were going for $250,000. The buyers would raze the 1950's brick ranch houses, and erect small castles.