Assuming that we ever escape the Shelob’s web that Mrs May, her bullnecked exquisite “Olly” Robbins and others have woven in our path out of the EU, the big question is, what next? Is it to be untrammelled “free trade”, or something else? For there are other options.

Hilariously, Left agitators like Owen Jones and unthinking right-on Facebook snarlers represent Leave as purely a Tory initiative, quite forgetting that it was Conservatives like Macmillan and Heath who shoehorned us into this mess in the first place.

Some say it was because we needed supranational government to prevent a third and even more terrible, nuclear-armed world war. Others say Supermac felt it was a way to block the takeover of socialism in Britain.

Both could be right, for these issues were addressed over sixty years ago, by none other than Lord Beveridge:

‘I believe that there are two desires which are common to all the peoples of all the nations of the world. One is the desire for peace, and the second is the desire to have their own way of life, not something forced on them from outside; to govern or, if they prefer, misgovern, themselves. How can they get both those things—peace and self-government, or self-misgovernment, as they prefer?’

I used to think that World Government sounded like a Good Idea, failing to factor-in human nature: build a Throne for the Ruler of All and “they will come”, the violent contenders for it.

But as Betrand Russell said, power takes more than one form. Such is the terror of Mutually Assured Destruction that the battling has diverted into economics and the Game Of CEOs’ Desks. Our time in the EU has seen big money and little people moving around, which has led to economic and social disequilibrium. There has only been one year since our entry in 1973 when we had evenly balanced trade with the EEC-EC-EU: not coincidentally I think, that was the year of the 1975 Referendum. Otherwise, losses for the UK, and the withering of our industries.

Yet the vision Mr Farage and others conjure up for us, of a Britain trading completely freely with the world, has its own potential pitfalls. For example, when Michael Gove attended January’s Oxford Farming Conference NFU President Minette Batters asked him for reassurances that domestic food producers would not be undercut by imports from countries with lower standards of production and environmental protection.

These are knotty problems, and not just for the developed countries. A 2012 study said that the Great Green Wheeze of making fuel from grain, plus the disruptive activity of international speculators, had the effect of tripling the price of Mexico’s corn and inflicting hunger on its poor.

Similarly, when rich countries draw in skilled health workers from abroad it may be a cheap way to fulfil our needs with ready-trained professionals, but it also means a ‘brain drain’ that is ‘adversely affecting the healthcare system in developing countries and, hence, the health of the population.’ Even the Guardian has noted this effect on Romania, whose health workers are emigrating.

Free trade needs some form of control of pace and direction, just as a car needs brakes and steering. It can’t all be left to the multinationals to decide, because in the interests of maximising shareholder returns they will seek to externalise costs and may ultimately destroy the system.

I have previously likened globalised finance to opening all the locks on a canal at the same time and perhaps this crude graphic will sketch some concerns: 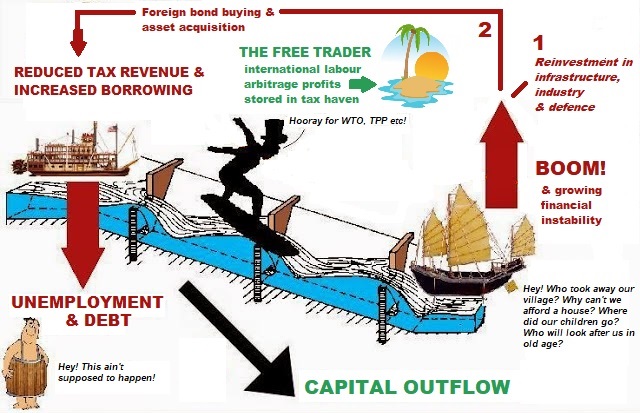 The current situation bears out what Sir James Goldsmith predicted in 1994, that unrestricted international trade would swing the seesaw towards capital and against labour forces and would lead to social tensions.

We are seeing growing inequality, even – especially - in Communist China. Over here, rich individuals can squirrel their wealth offshore while still living in London; multinational companies can incorporate wherever in Europe charges them the least; growing numbers of the poor feed and breed; the middle class, who don’t have enough to run away, get squeezed for tax even as Artificial Intelligence is a looming threat to their ability to earn in future.

But if we could level the seesaw so that we had more real jobs (employment statistics are a lie, even Big Issue sellers count as self-employed and qualify for income supplements) and better pay rates, then the working population would spend more, so increasing demand for each other’s goods and services. The increased turnover of money would also mean more tax revenue – a bite at every turn- so we might at last balance the national budget, instead of self-defeating, demand-shrivelling ‘austerity’. And, perhaps, much of the underclass would be raised from liability status to economic asset.

We must of course trade with the world, but on terms that are more equitable, at a more measured pace, so that all will benefit gradually, rather than this crazy Wild West gold rush.

Everything is a political decision. We have the capacity to bomb the human race to extinction several times over, but so far we have decided not to. We instituted the Welfare State at a time when the country was on its uppers and we couldn’t afford it – but we hadn’t done it in the midst of pre-WWI prosperity, so when was it ever going to come?

My argument for Brexit is not that we will all suddenly become much richer, but that we need more flexibility in a changing world; to be able to govern or, if we prefer, misgovern, ourselves, as Beveridge so wisely said.

I believe the Government's original reason for joining the Common Market were much less sophisticated than suggested. The UK economy was performing very poorly. (Some) Common Market members were doing rather well. The Government wanted a supply of Common Market pixie dust to sprinkle on the UK Economy. Lo and Behold, after entry the UK economy continued to perform very badly until a heroine uncovered the real problem and dealt with it. What we really need now is another heroine. Instead we are stuck with TM.

Hero *was* the heroine, wasn't she?